Zimbabwe President Robert Mugabe has signed into law the country's new constitution which aims to bolster human rights and curb presidential powers. As a next step, lawmakers must set a date for general elections. 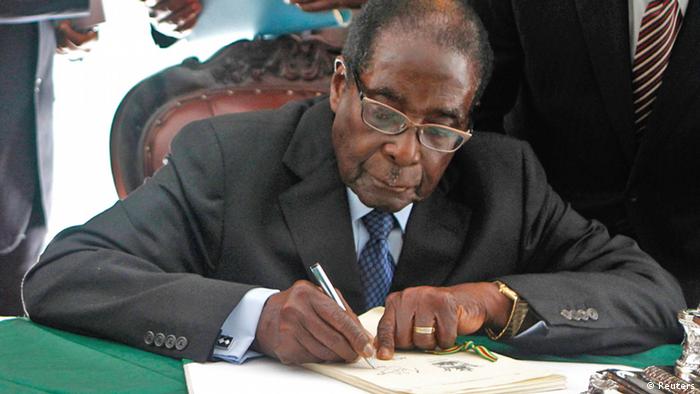 "This is a happening of joy, great joy indeed," Mugabe said at the signing ceremony on Wednesday to loud applause from lawmakers. "We want now to build the nation."

About 95 percent of Zimbabweans who voted in the March referendum approved the document, which limits the president to a two five-year-term limit and strengthens the right to freedom of expression and speech.

"We have shown that we can do it alone as Zimbabweans. Today is our day," said Mugabe.

The new constitution also paves the way for general elections, which could see the end of Mugabe's 33-year rule. Because the new presidential term limit does not apply retroactively, the long-time president may seek re-election.

Mugabe, 89, assumed power in 1980 after the end of British colonial rule. Despite praising his earlier years leading Zimbabwe, the international community levied sanctions on the African country's government over the last decade, citing human rights abuses and corruption.

The March referendum shifted international opinion of the country's government. The EU praised the move as a "major step" and has subsequently lifted sanctions on over 80 Zimbabwe citizens and several entities.

Zimbabwe's two main parties - Mugabe's Zanu-PF and the Movement for Democratic Change (MDC) of his rival Prime Minister Morgan Tsvangirai - now face a number of challenges, among them a disagreement on how soon polls should be held and how to raise funding.

Zimbabwe reportedly lacks the $130 million to finance elections. The government rejected money offered by the United Nations in exchange for allowing international observers to monitor 2013 voting.

Mugabe reiterated on Wednesday that neither his government, nor his people needed outside help for free and fair elections.

The Zanu-PF has said it wants to have voters head to the polls soon, but opposition party MDC wants to see the country begin its transition to a more democratic society before selecting a new government. The current Zanu-PF-MDC coalition government took power in 2008 following voter irregularities and widespread violence.

While Prime Minister Tsvangirai has expressed confidence that he can oust Mugabe, polls indicate his party, the MDC, has lost support among the country's 13 million.

A survey conducted US-based group Freedom House found that support for Zanu-PF jumped last year from 17 to 31 percent. By contrast, the MDC dropped in popularity from 38 percent to 20 percent.