ZANU-PF and the two MDC factions came together after international pressure led to the formation of a power-sharing government following the country's last election. The coalition term has not always been a smooth one. 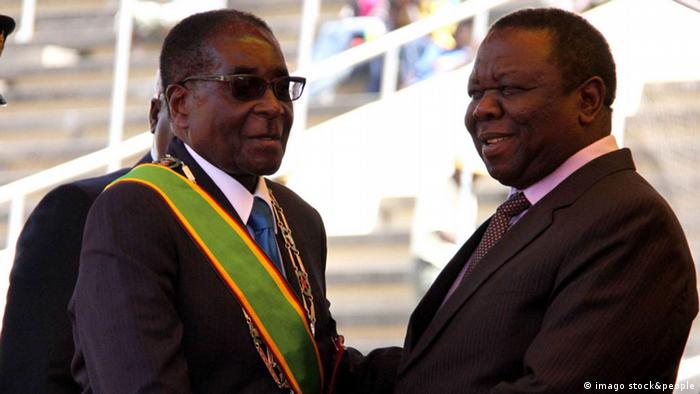 President Robert Mugabe’s Zimbabwe African National Union – Patriotic Front [ZANU-PF] party has held a majority in the Zimbabwean Senate since February 2009, while his opponent, Morgan Tsvangirai’s Movement for Democratic Change [MDC] party, has occupied the most seats within the House of Assembly, the legislative's lower chamber.

At Zimbabwe's last presidential election in 2008, Tsvangirai won the initial poll by the smallest of margins. Mugabe refused to accept defeat and after international pressure, a runoff election was called. Mugabe won the vote. International leaders condemned the way in which the elections had taken place and encouraged both sides to form a power-sharing government.

The Southern African Development Community, SADC, offered to broker talks, facilitated by South African president Thabo Mbeki in Pretoria. ZANU-PF and the two factions of the MDC were all present for the discussions which began on 10 July 2008. 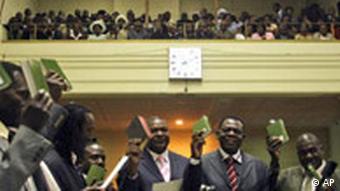 The power-sharing government is sworn in

Discussions for a power-sharing government progressed slowly. Mugabe announced he intended to convene Parliament on August 26, 2008. The announcement was met with protests from the MDC. Nonetheless, Parliament reconvened. The speaker within the House of Assembly speaker was chosen from Tsvangirai’s faction of the MDC—the first time since the country’s independence in 1980 that a speaker was chosen from an opposition party.

Negotiations continued, and on September 15, 2008, Mugabe, Tsvangirai and head of the smaller MDC faction, Arthur Mutambara, signed a comprehensive power-sharing agreement - referred to as the Global Political Agreement (GPA). As part of the accord, Mugabe would remain president but would cede some power to Tsvangirai, who would serve as prime minister; Mutambara would stand as deputy prime minister.

Jubilation quickly turned to disappointment in the following months when it became clear Mugabe and Tsvangirai could not agree on how to implement the agreement, arguing over how to allocate the new government’s key ministries between ZANU-PF and the MDC. Stalled talks and repeated attempts by the SADC to get discussions back on track continued against a backdrop of worsening economic and humanitarian conditions across the country. The unity government was a troubled one, the MDC factions and ZANU-PF struggled to agree on many issues.

Under the terms of the 2008 GPA, a new constitution was initially expected to have been drafted and put to referendum by 2011. However, the drafting process was fraught with difficulties and hindered by disagreements between ZANU-PF and the MDC factions. The draft constitution was not completed until early 2013 - two and half years behind schedule.

Endorsed by both Tsvangirai’s faction of the MDC and ZANU-PF, the new document provided for many changes, including the devolution of power, the introduction of presidential term limits, and the termination of the prime ministerial post; it also barred any further legal challenges concerning farms previously seized under Mugabe's land reform program.

In a referendum held on March 16, 2013, the draft constitution was overwhelmingly approved by voters; in May it was approved by both houses of Parliament and signed into law by the president. 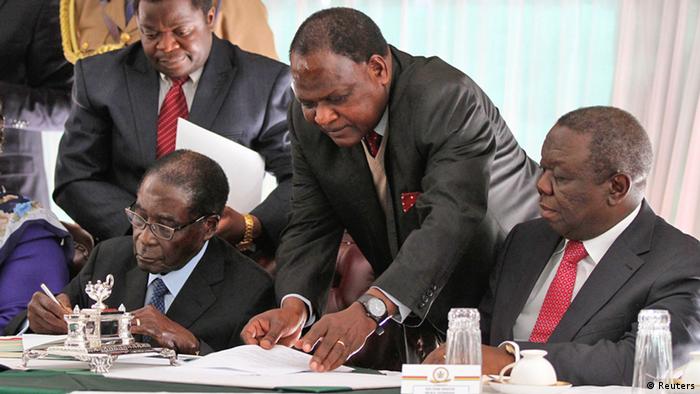 Key reforms, including those identified in the 2011 election roadmap, have not been implemented, or remain stymied by ongoing disagreement over their relevance.

President Mugabe manipulated the issue of sanctions as a way of frustrating possible progress. In response to human rights and election-related abuses perpetrated between 2001 and 2008, the United States and the European Union imposed targeted sanctions as a way to push for reforms. ZANU-PF, however, turned this pressure saying reforms would only be undertaken once the sanctions were removed. 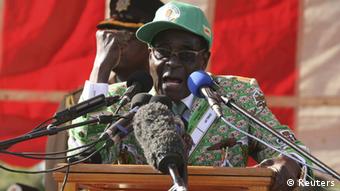 Mugabe says security forces will not be reformed

The security sector is still deeply involved in the political affairs of the country. Despite Article XIII of the GPA clearly stipulating that “state organs and institutions do not belong to any political party and should be impartial in the discharge of their duties,” ZANU-PF has retained control of the security apparatus, the ultimate line of defence of its dominance.

The SADC's calls to reform the military, police service, state intelligence service and other critical arms of the security sector have never been heeded. At its December 2009 party congress, ZANU-PF said it would not allow security forces to be subject to reforms.

Freedom of the media almost non-existent

The coalition government has also failed to make any changes to repressive laws such as the Access to Information and Protection of Privacy Act, the Public Order and Security Act (POSA), and the Criminal Law (Codification and Reform) Act. These laws are used to severely curtail basic rights through vague defamation clauses and draconian penalties.

The media in Zimbabwe remains muzzled. There are very few privately-owned newspapers and radio stations. This has meant that public information remains under the firm grip of ZANU–PF, which continues to use state-owned media to manipulate public opinion.

A rights group is warning that the authorities in Zimbabwe are cracking down on the opposition just weeks before voters go to the polls. Election violence five years ago claimed 200 lives. (12.07.2013)

Zimbabwe stumbles towards the ballot box

Zimbabwe goes to the polls on July 31. But can free and fair elections be arranged in such a short space of time? Prime Minister Tsvangirai and Zimbabwe's neighbors have their doubts. (08.07.2013)

Mugabe threatens to pull Zimbabwe out of regional bloc

President Robert Mugabe kicked off his re-election campaign with a warning to the 15 member southern African regional bloc SADC that Zimbabwe could withdraw amid demands for a free and fair vote. (05.07.2013)