Wounds Remain Unhealed on Anniversary of Srebrenica | Europe | News and current affairs from around the continent | DW | 11.07.2008

More than 30,000 people gathered on Friday, July 11, to remember the 1995 Srebrenica massacre and attend a funeral for 308 recently identified victims. 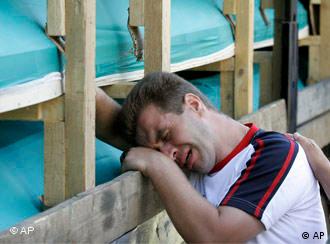 The massacre of at least 8,000 Muslim men and boys took place while the entire enclave was under the protection of the United Nations as a "UN safe zone" during the 1992-1995 Balkans conflict.

With the funeral on Friday, the number of victims buried in Potocari, a site just east of Srebrenica, totalled 3,215. The remains of the victims were exhumed from mass graves and identified by DNA analysis.

"We should pray that sadness becomes hope, that justice replaces revenge, and that a mother's tears are a prayer for the tragedy of Srebrenica never to happen again," the head of Bosnia's Islamic Community, Mustafa Ceric, said during the religious service.

Ceric also called for justice, as did the chairman of Bosnia's tripartite presidency, Haris Silajdzic, who warned that all those responsible for the massacre in Srebrenica must finally be apprehended.

Just a few weeks after massacre, The Hague-based International Criminal Tribunal for the former Yugoslavia (ICTY) indicted both Bosnian Serb leader Radovan Karadzic and Mladic for war crimes, genocide, crimes against humanity and severe breaches of the Geneva Conventions.

While Mladic is believed to be hiding in Serbia, Karadzic's whereabouts remain unknown. 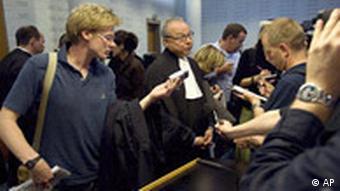 Axel Hagedorn, center, a lawyer for the victims, talks to journalists at The Hague District Court in The Hague, Netherlands, Thursday, July 10, 2008

Commenting on the 13th anniversary of Srebrenica massacre, Serbian President Boris Tadic said in Belgrade the new Serbian authorities are determined to successfully complete cooperation with the ICTY by apprehending Mladic.

"The victims of the massacre in Srebrenica remain a constant warning that oblige us to have all those indicted for war crimes end up in The Hague," Tadic said in a statement.

United Nations will not face trial

On Thursday, July 10, a Dutch court ruled that the United Nations will not face trial over the Srebrenica genocide.

The court accepted the UN plea that it was immune under its 1945 charter from such legal action. The case was brought by relatives of the massacre victims who contended that Dutch UN peacekeepers failed to prevent the murders. 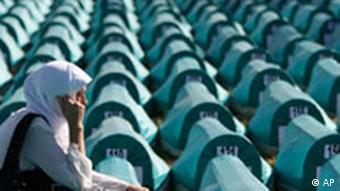 Lawyers for the Mothers of Srebrenica organization issued a statement later saying they would appeal the court's verdict. They said it was "unacceptable" that the UN should remain the sole organization in the world that could not be subject to judicial control. If necessary, the appeal would be taken to the European Court of Human Rights in Strasbourg, lawyers said.

The court said that the immunity of the United Nations was comprehensive, and that there was no known case of a claim against it ever having been successfully brought.

The court ruling added that if it were left to national courts to decide what was to be expected of the United Nations, then this could have an adverse effect on future decisions made by the UN Security Council on peace missions.

Dutch peacekeepers failed to stop a massacre of thousands of Bosnian Muslims in the United Nations-protected enclave of Srebrenica in 2005. Now two trials will examine Dutch and UN culpability. (16.06.2008)

Bosnians Continue to Struggle with War-Torn Past

As a new UN special envoy for Bosnia took over this week, the country's citizens still struggle to come to terms with their war-torn past. Experts believe the healing won't begin until the crimes have been dealt with. (08.07.2007)

Should the UN be brought to trial for the Srebrenica massacre? Please include your name and country in your reply.