Baby Saybie weighed little more than an apple when she was born. Doctors said she wouldn't survive long. But after five months in intensive care, she's been given the all-clear to go home with her family. 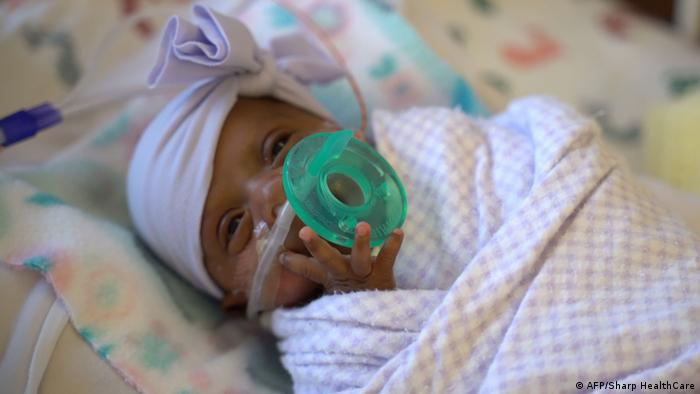 A baby thought to be the world's tiniest surviving infant has been discharged from a San Diego hospital after five months in intensive care.

The baby girl weighed just 245 grams (8.6 ounces) and measured 23 centimeters (9 inches) when she was born in December.

She was delivered via an emergency cesarean section 23 weeks and three days into her mother's pregnancy. A typical pregnancy lasts 40 weeks.

"It was the scariest day of my life," the girl's mother said in a video released by the Sharp Mary Birch Hospital for Women & Newborns. The family wished to remain anonymous, but allowed the girl to be identified as Saybie — the name nurses gave her.

Doctors told Saybie's father after the birth that he would only have an hour with his daughter before she died.

Saybie is listed as the world's smallest baby to survive on the Tiniest Baby Registry maintained by the University of Iowa. 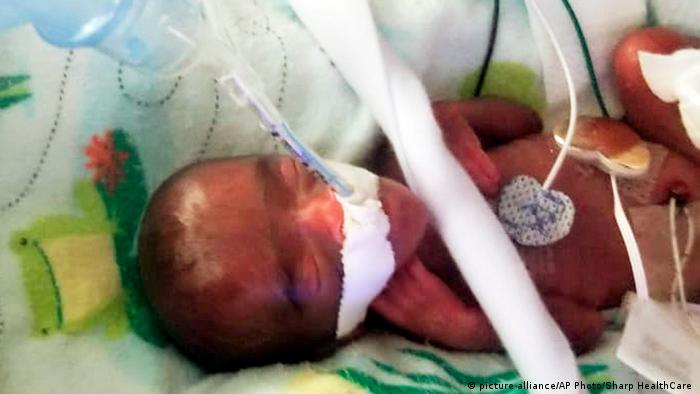 The baby girl weighed about as much as an apple, or a hamster, when she was born in December

Dr Edward Bell, a professor of pediatrics at the university, told The Associated Press that Saybie had the lowest medically confirmed birth weight in their records. But "we cannot rule out even smaller infants who have not been reported to the registry," he said.

The world's previous smallest baby in the registry was a girl from the western German city of Witten, who weighed 252 grams when she was born in 2015.

Micro-preemies — infants born before 28 weeks of gestation — have a slim chance of survival and can often suffer a range of health complications.

Saybie gradually gained weight over the five months she spent in the neonatal intensive care unit and left the hospital in May as a healthy 2.26-kilogram infant.

"I feel blessed," her mother said. "She's the smallest baby in the world and she's mine!"

Neonatologist Christoph Bührer tells us how to help preemies get off to a good start in life. Can an incubator really simulate conditions in the womb? What's kangaroo care? And can premature births be prevented? (12.05.2016)