Germany became World Champions for the first time in Switzerland in 1954 in a fairytale final that started the German World Cup legend. 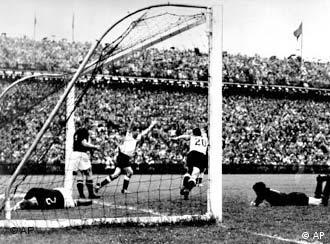 In the World Cup's highest scoring tournament -- 140 goals scored in 26 matches – all eyes were on the 1952 Olympic champions Hungary who arrived in Switzerland unbeaten in their last 31 games. Fielding such legends as Ferenc Puskas, Jozsef Boszik and Sandor Kocsis, the Hungarians contributed to high goal tally by thrashing Korea 9-0, the Germans 8-3 and Brazil 4-2 on their way to the final.

Germany, taught a lesson by Hungary in the group stage, picked themselves up and marched confidently to the last game for a showdown with the tournament favorites, recording a hefty score line themselves on the way when they beat Turkey 7-2 in the final group game.

Everyone expected Hungary to wipe the floor with Germany again and it looked to be a dead cert when they rapidly went two goals ahead. However, in remarkable scenes, the "Miracle of Bern" revealed itself to the stunned crowd. Within a ten-minute spell, the Germans had equalized through goals by Max Morlock and Helmut Rahn and had rocked the Hungarians.

The game was deadlocked until the final six minutes. After a tense moment when the Hungarians hit the post, Rahn made history by scoring the winner for West Germany after the Hungarian keeper had slipped on the turf. West Germany were World Champions for the first time.