Dina Asher-Smith blew away the field in the women's 200 meters, securing a first ever world sprint title for a British woman. In the other big final on Wednesday, Grant Holloway won gold in the men's 110 meter hurdles. 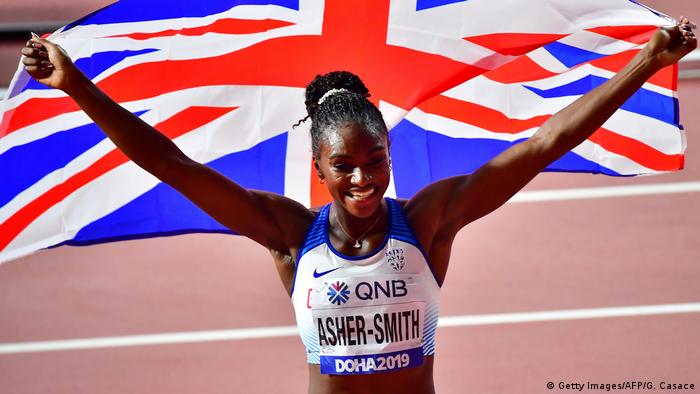 Dina Asher-Smith has become the first British woman to claim a global sprint title, seizing her chance to win the world championships 200 meters in front of another sparse crowd in Doha.

With many of the top medal contenders pulling out or skipping the event, Asher-Smith proved the class act in the field, powering home in a national record 21.88 seconds to add gold to the silver she won in the 100m.

The victory doubled Britain's medal tally at the championships to two, both coming from Asher-Smith. Until Doha, Britain's women only had three silvers and one bronze from the 1948 and 1960 Olympics over the 100m and 200m.

Holloway slowed toward the end but held on to win in 13.10 seconds, 0.05 faster than 2015 champion Sergey Shubenkov, a Russian competing as a neutral athlete. Pascal Martinot-Lagarde was third for France in 13.18.

After crossing the finish line, Holloway kept running around the turn in celebration before collapsing onto the back straight. McLeod clipped two hurdles and veered into the wrong lane, colliding with Spain's Orlando Ortega, who shoved McLeod and signaled his frustration after crossing the line fifth.

Elsewhere, Pawel Fajdek of Poland, the undisputed king of the hammer at the world championships, sealed his fourth consecutive title with a throw of 80.50 meters.

China's Feng Bin won a surprise gold in the discus, beating American Olympic champion Valerie allman in her own backyard. There was also success for a runner who this year switched her allegiance from Kenya to Kazakhstan.

At the 2022 World Athletics Championships in Eugene, Oregon, the best athletes in the world are joined by the best sports photographers. Here are some of our favorite pictures.