Workplace stress is impacting on lives and balance sheets alike, and more strongly than ever, a new study has found. German Labor Minister Ursula von der Leyen has urged employers and trade unions to seek solutions. 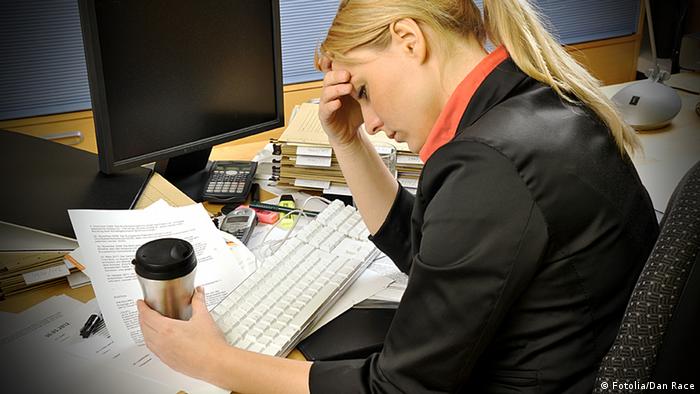 Ursula von der Leyen said she hoped employers and trade unions could agree on a code to combat stress in the workplace, saying an agreement would be in the best interests of all parties.

"In 2011, we logged 59 million lost days of work owing to psychological illnesses. That constitutes an increase of more than 80 percent in the last 15 years," von der Leyen said in Berlin.

"It's costing a really large sum of money," the labor minister said, estimating the 2011 figure at 6 billion euros (roughly $8 billion).

The "Stress Report Germany 2012" study, published on Tuesday, indicates that 43 percent of workers believe that their jobs have become more stressful in the past two years.

Half of the roughly 17,600 people surveyed said they faced severe time pressure, and of those who took time off owing to psychological illness, 70 percent said the cause was stress.

Talks between employers and unions seeking a common "statement on psychological well-being in the workplace" recently fell apart, with trade unions blaming the employers.

Von der Leyen said such legislation remained a possibility, although she added that it would only be meaningful if labor representatives - not the government - forged it. Some measures to protect workers' psychological well-being are already enshrined in German and EU law.

"There is a need to act in our businesses," the Christian Democrat cabinet minister concluded.

Almost half of the full-time staff surveyed in the study by the Federal Institute for Occupational Safety and Health (BAuA) said they worked more than a 40-hour week; one in six said they were in the office for more than 48 hours. More than 60 percent said they worked Saturdays.

The institute's president, Isabel Rothe, said her organization had noted a steep rise in workplace stress up until 2006, with levels remaining comparatively consistent since then.

Causes of stress ranged from an increased focus on multi-tasking to exasperating e-mail traffic that interrupts ordinary workflows -and in some lines of work, simply monotony.