Working Together to Defuse Russia′s Nuclear Timebomb | Germany| News and in-depth reporting from Berlin and beyond | DW | 06.01.2008

On the beaches of the Barents Sea, near the Russian city of Murmansk, ex-Soviet nuclear submarines lie rotting, like ticking ecological time bombs.The Russians have called on German experts to help prevent disaster. 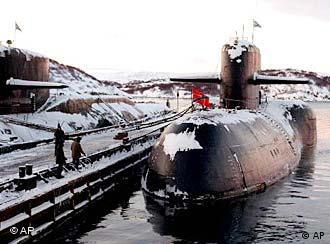 Murmansk -- the biggest city to the north of the Arctic Circle -- is not exactly a pretty sight. The city, which during World War II played a key role in the Soviet Union's war efforts and later became the base for the North Sea fleet, has been transformed into an industrial wasteland with dilapitated factories and piles of rubbish and debris lining up against the horizon. 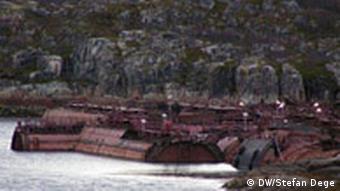 Rotting submarines off the coast at Murmansk

From behind the razor wire of a restricted military area, ship wrecks can be seen rising from the sea. Moored to floating pontoons, some 150 red-brown hulls -- discarded nuclear submarines -- bob up and down in the fish-rich fjords. These dying vessels were once the pride of the Soviet Union.

For over two years, German company EWN has been building storage facilities in Murmansk to hold the reactors from the decommissioned and disintegrating Russian nuclear submarines. The German engineers working on the project know a lot about Russian nuclear technology. Many of them studied in the former Soviet Union.

The large concrete area, about the size of a soccer pitch, and the huge containers which sit upon it will eventually provide a home for all the potentially hazardous atomic cores of the rotting vessels and help prevent any environmental disasters arising from a rupture at sea. The cost of preventing a catastrophe is currently in the range of 300 million euros ($441.5 million). 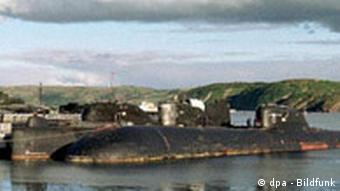 The subs are transported to nearby Nerpa to be cut up

Utilizing shipyard workers from the nearby port of Nerpa, EWN has supervised the removal of the highly radioactive fuel elements from the submarines. For the Russians, the work is important but sad. Sawing the pride of the Soviet navy to bits claws at the Russian soul. Each submarine cost Moscow over two billion dollars.

A floating dock brings the steel colossi along the fjord coast to the storage facilities, providing a safe and stable base for the fragile vessels on the unpredictable sea. A rail system pulls the hulks from the sea and takes the reactors to their new storage areas. Fourteen have already been safely re-housed. Seven more currently wait in the Nerpa shipyard to make the journey down the coast.

The Germans are not helping the Russians simply out of the goodness of their hearts. There is a common objective. Germany has an interest in preventing any nuclear disasters on the Barents Sea coast.

With Europe's northern coastline abutting Russia's, helping to secure the reactors at Murmansk reduces the risk of potential contamination in European waters.

To that effect, Germany is hoping to contribute to another storage facility for low to medium-radioactive waste.

It is hoped that in time, the current threat from the former Soviet Union's nuclear submarine fleet will go the way of the previous one: eradicated by cooperation and understanding.

Norway plans to cover a sunken German WWII submarine in a giant sarcophagus to stop dangerous mercury leaking from the wreck. Mercury has been seeping from the U-boat for more than 60 years. (20.12.2006)

German authorities have confirmed that Russian nuclear experts will be allowed to airlift about 300 kilograms (660 pounds) of enriched uranium from a Soviet-era nuclear research reactor in Germany. (09.12.2006)

Should Russia be made to do more to secure its Soviet-era nuclear material? Please include your full name and country with any reply.