Gold medals for biathlete Laura Dahlmeier and ski jumper Andreas Wellinger bookended an impressive start for Germany in Pyeongchang. There was also joy for the hosts but the united ice hockey team didn't fare so well. And that's it for the first day of the 2018 Winter Olympics. An 8-0 loss for the combined Korean ice hockey team dominated the later stages of the day, more for political than sporting reasons.

But there was better news for South Korea earlier in the day when Lim Hyojun won gold in the 1500m short track speed skating, handing the hosts their first medal of the Games.

Germany top the early medal table after they picked up a pair of golds on Saturday. Biathlete Laura Dahlmeier, 24, got the party started when she hit all 10 targets to win the women's 7.5-kilometer sprint.

"The coach told me I had to fight for every second because there are some athletes behind me, and that I should run for my life," the elated athlete said after her win.

Then, as the clock ticked past midnight, Andreas Wellinger dramatically claimed ski jump gold for Germany, pipping a pair of Norwegians to the top of the podium.

We’ll see you again in about eight hours or so, when we’ll have snowboarding, alpine skiing, speed skating and plenty more. Thanks for your company.

16:23 - GERMAN GOLD! Everyone was looking for his teammate Richard Freitag but Andreas Wellinger has won the men's ski jump. The 22-year-old watched as Poland's Stefan Hula failed to match him and made it two gold for Germany on the opening day.

16:08 - It's officially gone midnight in South Korea, which means it's technically day 2 of the Games. Still 10 jumpers to go in the men's ski jump.

15:55 - That lead has now gone, with Norway's Daniel-André Tande landing a huge effort.

15:40 - The ski jump, today's final event, is nearing its conclusion. Slovenia’s Peter Prevc is currently in the lead.

14:43 — Women's Ice Hockey: Switzerland increases their lead over Korea to 6-0 in the second period.

14:00 — Speed Skating (Oval): The Netherlands have swept the podium in the Women's 3000m. Carlijn Achtereekte collects the gold, Ireen Wust the silver and Antoinette De Jong the bronze. 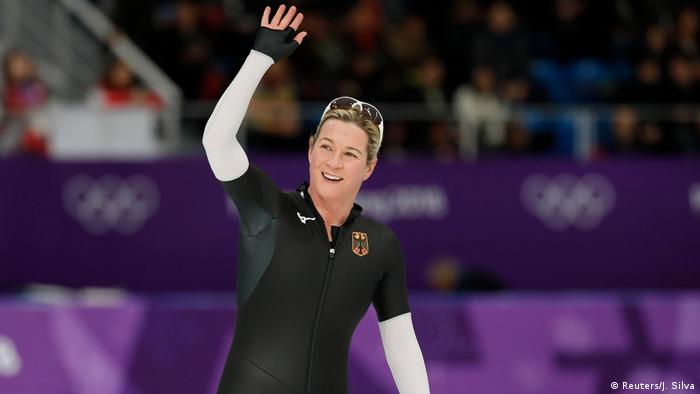 13:48 — Women's Ice Hockey: Not a great debut for the unified Korean women's hockey team. They are currently losing to Switzerland 3-0 in the first period of their preliminary round match.

12:30 — Biathlon: Laura Dahlmeier collects Germany's first gold medal in Pyeongchang! She wins the 7.5-kilometer sprint with a time of 21:06.2.

12:25 — Speed Skating (Short Track): Results of the semifinal heats for the Men's 1500m (top three qualify for the finals)

12:22 — Biathlon: Germany's Franziska Hildebrand begins her 7.5-kilometer sprint, the 14th competitor out of the gate.

12:15 — Biathlon: the women's 7.5-kilometer sprint has commenced with Austria's Lisa Theresa-Hauser the first out of the gate. Germany's Denise Herrmann starts third.

11:48 — Speed Skating (Short Track): Results of the preliminary heats for the Women's 500m (top two qualify for the quarterfinals):

11:14 — Speed Skating (Short Track): Results of the preliminary heats for the Men's 1500m (top three qualify for the semifinals):

10:46 — Sweden's women's hockey team beats Japan 2-1 in the first preliminary match. Japan was unable to force overtime despite an empty net and a power play advantage in the final 30 seconds.

10:16 — Sweden retakes the lead! Sara Hjalmarsson scores to put her country back ahead 2-1.

10:12 — Women's Ice Hockey: Faceoff for the third period of the first preliminary round game between Sweden and Japan. The score is tied 1-1.

9:59 — Women's Ice Hockey: End of the second period. Sweden and Japan locked at 1-1 after goals from Fanny Rask and Rui Ukita.

9:51 — Women's Ice Hockey: Japan has leveled the score 1-1 against Sweden in the second period, Rui Ukita capitalizing on a defensive mistake from Sweden and slotting it home just outside the crease.

9:39 — Women's Ice Hockey: Sweden leads Japan 1-0 in the second period in the first game of the preliminary round. Fanny Rask scored in the first period to give Sweden the lead.

8:55 — Cross Country Skiing: Carlotte Kalla of Sweden collects the first gold medal of the Pyeongchang Olympics, winning the Ladies' 7.5 km + 7.5 km skiathlon. Marit Bjoergen of Norway gets the silver and Finland's Krista Parmakowski the bronze in a Scandinavian sweep.

8:46 — Cross Country Skiing: Marit Bjoergen leads the field as the skiers enter the quarter of the race.

8:00 — Good morning! The Winter Olympics are kicking into full gear after the opening ceremony in Pyeongchang. Below is some of the imagery from the opening festivities!