Why the refugee crisis calls for imaginative urban planning | Germany | News and in-depth reporting from Berlin and beyond | DW | 05.09.2015

Not only politicians are looking for solutions to ease the refugee crisis. Architects are also devising ways to integrate new arrivals that avoid ghettos arising on city limits while also fostering urban regeneration. 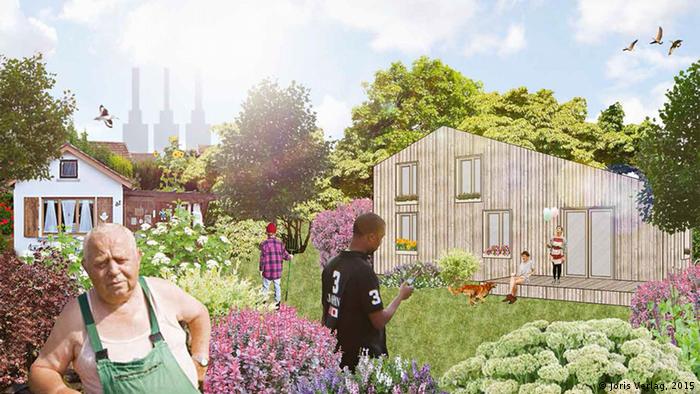 One fixture in the pictures that went round the world in the recent week of violent clashes outside a refugee shelter in Heidenau, Saxony, was the blue-and-yellow “Praktiker” sign, left over from the building’s days as a DIY center. It was repurposed by local authorities at short notice after heavy rain turned the refugee tent camp in nearby Chemnitz into a mud pit.

Other housing solutions found in recent weeks for the influx of refugees include an airdome near Berlin's main station (dubbed the Caredome by its manufacturer), former barracks, banks and psychiatric clinics, with even the disused Tempelhof airport under consideration as temporary accommodation.

Equally improbably, IKEA is now manufacturing flat-pack shelters in partnership with the UN and the non-profit group Better Shelter.

"Approximately 50 Better Shelters were delivered to UNHCR and the Red Cross in FYR of Macedonia a few weeks ago," says Märta Terne from the organization. "They have been put up at two sites in Skopje, functioning as transit shelters for asylum seekers waiting to travel onwards to other destinations in Europe. Over 300 shelters will be shipped to Greece within a matter of days. We have noticed a huge increase in enquiries from organizations in Europe during the summer, as a direct effect of the large stream of men, women and children fleeing to Europe via the Mediterranean Sea from the Middle East and from Africa."

But innovative as they are, these units are not suited to the chilly winters of northern Europe, leaving authorities scrambling for alternatives. Usually, they opt for containers, with this sector also seeing an unprecedented surge in demand.

“Container unit output is set to rise this year by 8-10 percent to more than 50,000,” said Europe’s largest manufacturer, Austrian company Containex, in the Financial Times earlier this month. 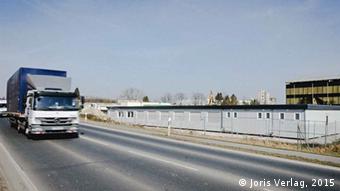 But to architect Jörg Friedrich from the Leibniz University in Hanover, they’re plain inhumane. "Demand has risen so steeply of late that they're not even cheap and by their very nature, they're only temporary," he told DW. "They're designed as a stopgap solution not suited to long-term living, although that is what's called for. These people are here to stay, and they have a right to a decent living space. But they're put up in places that aren't fit for human beings. They leave residents no privacy whatsoever, which inevitably leads to tensions. They're not aired; they're not sound-proofed. Rrain on the roof of a container can be as loud as gunfire, which is potentially traumatic for someone who's just fled a war."

The need for a new housing typology

But they meet the requirements of German law, which entitles a refugee to 7 square meters of living space, so there is little motivation on the part of the authorities to seek improvements.

"As an architect, what I want to do is propose alternative forms of accommodation which leave politicians no choice but to accept them," says Friedrich.

"They tend to argue that cities are full," he says. "But they're not. There is plenty of vacant space. For example, forty percent of the space available in multi-storey car parks isn't used and could easily be made over as homes, which could theoretically also be attractive to students, say."

Housing that allows refugees to live side-by-side with the rest of the population is key to his strategy. He argues that locating refugee homes on city limits - the norm across Europe - amounts to ghettoizing the new arrivals, hampering integration and making it easier for the general public to ignore them. 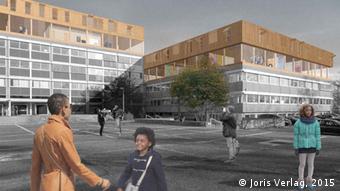 "What we need is a new housing typology," he says. "Many German cities feature buildings from the 1950s and 60s with flat roofs. They're often used for trendy bars, so why not use them as innovative living spaces?"

He and his students in Hanover also propose remodelling wooden huts in Germany's ubiquitous allotment gardens as well as cargo barges. "Many former coal barges, for example, are no longer in use," says Friedrich. "They can easily be converted into homes and a further advantage is that they can easily move from one spot to another, depending on where they're needed."

As Jörg Friedrich points out, the history of German architecture and urban planning shows how refugee housing can weave into the fabric of a city, enriching it and fostering its growth.

After the Second World War, many expellees from former eastern territories of Germany were settled in East Frisia, he explains, in areas that are now considered valuable real estate along the River Ems. "What started out as refugee camps, with residents encouraged to grow their own vegetables, evolved over the years into desirable residential neighborhoods with coveted gardens."

The roots of the "architecture of welcome" reach back even further. "As long ago as 1621, Duke Friedrich III of Holstein-Gottorf gave a home to exiled Dutch Remonstrants and founded what is today known as Friedrichstadt in Schleswig Holstein, taking advantage of their hydraulic engineering know-how," Friedrich says.

"Even the landmark Gendarmenmarkt in Berlin was originally a refugee camp, established in 1685 by Frederick William, elector of Brandenburg, for persecuted Huguenots, not least because he was keen on their skills as craftsman. Sure enough, their contribution to the city was immense - just look at the French Cathedral!"

Tempelhof airport, the iconic structure that once oversaw the Berlin air lift in the 1950s, may be re-invented as a refugee shelter. The overstretched city administration did not deny it was considering the option. (27.08.2015)

German head of state Joachim Gauck has praised volunteers for showing the positive face of Germany while on a visit to a refugee home in Berlin. It follows two xenophobic-related incidents the previous night. (26.08.2015)