Being white in South Africa was once associated with prosperity and living in an upmarket neighborhood. Such stereotypes are now becoming less and less true as poverty-stricken whites move into the townships. 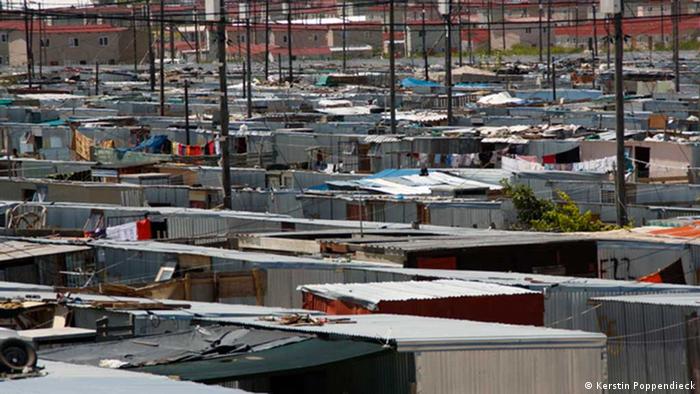 During the apartheid era, the townships were usually built on the periphery of towns and cities. They were the underdeveloped urban living areas, reserved for black Africans and people of mixed racial ancestry .

Blikkiesdorp a township in the vicinity of the Cape Town airport has been home to Mirinda and her sister Ester De Vries for nearly a year. They are both white South Africans. Walking through their new surroundings, the two sisters never stop thinking of the life they have left behind. 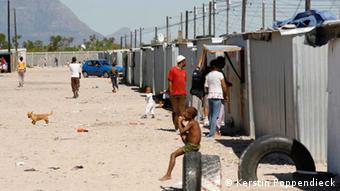 The township was originally built to provide temporary housing

This particular township was created seven years ago and consists of thousands of shacks that were meant to serve temporary shelters. The authorities had been planning to construct brick houses.

Although Mirinda now lives in the slums and has a different skin color to most of her neigbors, she seems unperturbed.

“I tell my friends straight out that I live in Blikkiesdorp Block R number 30. If they don't want to associate with me anymore because of where I live, I don't care.”

Global economic crisis hits some white South Africans hard
Mirinda has a hut for herself while her sister Ester shares a 13 square meter shack with her husband and their three sons. The youngest, Conrad is just a year old.

With only a T-shirt and wearing no pants or diapers, Conrad plays with half a brick in front of the tin shack. Sometimes Ester thinks wistfully back to her old life when they lived in a house built of brick and could afford to buy clothes and diapers. 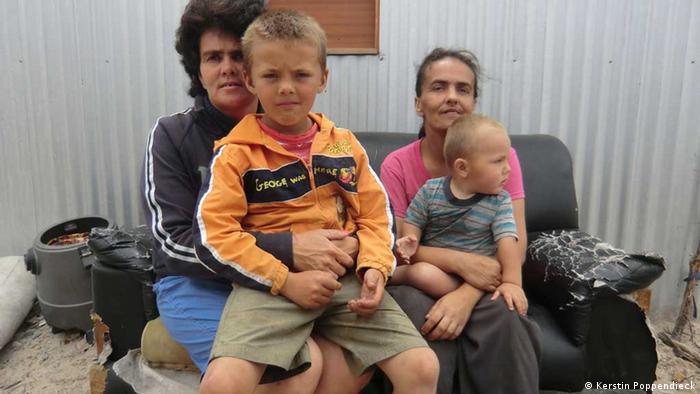 But suddenly everything changed. The family was hit by the global economic crisis. Ester and her husband lost their jobs. Without a regular income, they could no longer afford the rent and slipped into poverty.

Although living in Blikkiesdorp isn't easy for the two sisters and their families, they and other white South Africa in this township remain optimistic that things will change for the better in the future. "I get along better with blacks than with whites. White people always thnk they're better. But as far as I'm concerned, God created us all equal,“ she says.

A tolerant and open life in the township

In the beginning, life for Ester in Blikkiesdorp was a culture shock. It took a while before she finally accepted that there was no privacy in the township. The metal walls are so thin that the neighbors can hear everything.

When someone prepares a meal, the neighbor expects to be invited. There is stronger sense of community in the townships than in the city. As more and more white South Africans move into the township, their major concern is for their own safety and for that of their families.

"I have three or four friends, who are there if I encounter trouble-makers," she says.

Although she says she was given odd looks in the township because of her color when she first arrived, she now feels she has been accepted by the local community. 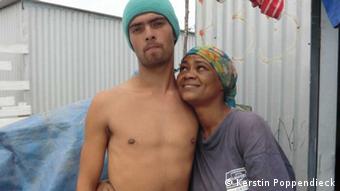 The township is home to people from a variety of ethnic backgrounds..

Bernadete De Kock is a South African of mixed racial ancestry who lives in Blikkiesdorp. She vividly remembers the first time she saw Ester in the township. It was a shock to her because she always thought all white people were rich.

Meanwhile Bernadete has become convinced that because of the diversity of the people living in Blikkiesdorp, South Africa's dream of a Rainbow Nation will one day come true.

But she remains realistic "If the people in our government cannot get along with sort of diversity, then how can they expect us to do so?" Bernadete asks. Blikkiesdorp is home to people from a wide variety of origins and backgrounds. They live peacefully together. "I am glad to see that people can actually be capable of unity and reconciliation."

South Africa continues down the road to equality

In the past few days the vuvuzela has come to represent South Africa. But for all its noise, it is a quiet synonym compared to the man who helped get the country to the point it is at today. (17.06.2010)

July 18 is Nelson Mandela Day in South Africa. It's the day when South Africans celebrate their former president's contribution to universal freedom by donating 67 minutes of their time to public service. (17.07.2012)

The ANC liberated South Africa from minority white rule, but it has undergone a rocky - some would say incomplete - transition from liberation movement to governing party. (06.01.2012)