"Smoking can cause a slow and painful death" reads one of the new warnings on cigarette packets in Germany. But there is doubt as to just how seriously such in-the-face warnings are being taken. 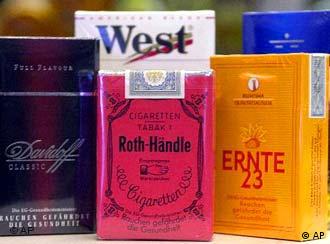 Despite health warnings on cigarettes, Germans are unlikely to kick the habit.

It takes a visit to Germany to believe just how smoky a society it is. Ranking third after Spain and Greece when it comes to the number of smokers on its books, Germany celebrates smoking as a way of life. It is so ingrained that the printed threats which dominate 21st century cigarette packets seem unlikely to scare too many smokers into stubbing out for good.

Although official statistics show that cigarette sales in 2003 dropped by nine percent over the previous year, and big brand producers have reported trailing sales in Germany, there is no doubt that the German population is still puffing away. In reality, more smokers have been turning to rolling tobacco and cigars, which have been spared the higher taxation rates dumped on cigarettes over the past couple of years.

There is also evidence that more and more smokers are turning to unofficial sources to feed their habit. A spokesman for British American Tobacco, which puts its name to the likes of Lucky Strike and Gauloises Blondes, told the Reuters news agency that increased tobacco taxes might blow smokers out of their clutch and onto the black market. "Our concern is that the new taxes will not stop people smoking, but that they will turn to the black market and cheaper forms of tobacco," he said.

Some fear that the trend in buying cheaper cigarettes will grow once the EU opens its eastern borders to accession members in May. Head of the Association of German Cigarette Producers, Ernst Brückner, told the Frankfurter Allgemeine Zeitung that once the borders are open, smokers who live near Poland, for example, will systematically shop in the neighboring country in order to circumnavigate further tax hikes planned by the German government over the next two years. The first of these increases will push the price of a packet of smokes up from its currently modest European rate of €3 ($3.80) by a further euro.

Keeping the smoke out of bars

Earlier this month, the EU Commission announced it was considering a move to outlaw smoking in bars and restaurants across the 15 member states. European Health Commissioner David Byrne told Die Welt newspaper that if the EU were thinking of introducing smoke-free work places, they would have to extend the ban to include bars and restaurants.

The suggestion met with rigid resistance in Germany, where relaxing in a bar with a stick of nicotine and preferred tipple is quite simply part of the fabric of society. German cities are splitting at the seams with bars and restaurants and at best only one in two of them have a designated smoking section with the rest of the hostelry deemed smoke free.

Marc Schnerr, press officer at the German Hotel and Restaurant Association (DEHOGA) told DW-WORLD that he believed David Byrne was on the warpath against smokers, and added that any move to ban smokers from lighting up in gastronomic venues would have disastrous consequences for jobs in the industry.

"Take small bars for example, they don't have the space to section off a no-smoking area, and a ban would mean massive reductions in turnover for them," Schnerr said. The knock-on effect of that, he added, was the threat to thousands of jobs and trainee positions in the industry.

Schnerr believes that Germans feel they are surrounded by more than enough legislation as it is, and that the implementation of smoking laws in places traditionally reserved for fun would rob the nation of the last place where smokers and non-smokers can relax under the same public roof.

He believes the issue has to be dealt with on an individual basis. It should be left up to the businesses themselves. People go to these places voluntarily and they are not inconsiderate of one another once there, the DHG spokesman told DW-WORLD.

He also stressed that his organisation was always at pains to encourage hoteliers and restaurant owners to take the wishes of non-smokers into consideration. As long as they continue to provide enough places for both smokers and non-smokers to go, he believes the thousands of jobs which would be blown away with a ban, will be kept from going up in smoke.

Continuing its crackdown on nicotine addiction, the European Union may seek a Europe-wide ban on smoking in bars and restaurants. (Jan. 15, 2004)

Clouds of Smoke over Europe

Not only Germany is having to deal with the foggy issue of what to do with determined smokers, many European countries have been looking for ways to encourage their citizens quit. (Jan. 24, 2004)