Where Beauty is the Ugly Side of Life

Many of them have been bullied and taunted for years because they did not fit the perception of what beautiful meant. Now, thanks to a new club, many of Hamburg's less attractive people are stepping out of the shadows. 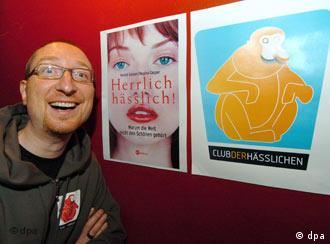 Alcohol has long been credited with helping less than aesthetically pleasing people have sex for hundreds of years, but a new club in Hamburg wants to refine that idea slightly by providing the beautifically challenged with the chance to get together, have fun and rebuild damaged confidence.

In a culture where it seems physical desirability equates to perfection and where the much-hyped 'beautiful people' are held up as wafer-thin role models for the world's mere mortals to aspire to, ugly people are having a hard time. While more 'original' looking people no longer have the fear of being sold to a traveling freak show by destitute parents, modern life offers them contemporary problems like the search for acceptance, self-worth and happiness.

And that’s where "The Ugly Club" comes in.

The Ugly Club provides those who suffered taunting at school and being passed over in later life a chance to move beyond beauty-mania and attempt to find inner peace.

Both Regina Gaspar and her husband Harald were picked on when they were young because of their less than conventional looks. But both agree that they have since developed a strong sense of self-worth as they have pursued their careers. Harald is a creative director in a large advertising agency and Regina is a journalist. It was their experiences of overcoming 'ugliness' that inspired them to start the club.

The idea is based on a historical practice which dates back to the 17th century. The Italians pioneered the idea of offering the less than beautiful a chance to find happiness. The fathers of the less desirable daughters in the alpine village of Piobbico would come together and organize a party where bachelors from the surrounding towns could come and find a wife.

This tradition was rekindled in the 1970s in the "Mecca of the Ugly," as Piobbico was known, and continues to flourish. "Over 3,000 people attend the 'party of the ugly' every year in the mountain village," Regina says.

That convinced the Gaspars that such a thing could be a success in Germany. And initial results prove them to be right. At the first meeting in October, about 100 people attended. There are now 40 confirmed members with many other casual drop-ins, mostly between the ages of 30-40, attending less regularly. The couple expects the numbers swell at the coming meetings in November since many people have expressed the desire to attend.


Everybody's welcome, according to the Gaspars. So for those of you who've struggled with your looks, off to Hamburg.

Quirky and offbeat news from around Germany