What Is A Comet?

What are the fiery streaks of light made of, how big are they and where do they come from? As Europe's Rosetta orbiter prepares for a rendezvous with a comet, DW-WORLD sheds light on some of these questions. 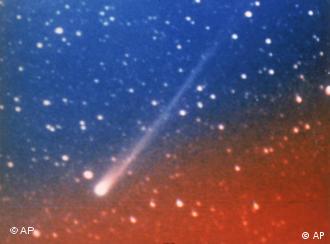 Despite all the information scientists have gathered on comets in the last several years, the galactic rocks remain some of the most enigmatic pieces of the Solar System. Because research so far rests on pictures and collected dust samples from fly-bys, scientists are still pretty much in the dark about the exact composition of comets, but a few things are fairly certain.

What is a comet?

Comets are small, dark icy bodies that orbit the Sun and are believed to be almost pristine material left over from the creation of the Solar System some 4.6 billion years ago. They are barely influenced by gravity, and despite their density are relatively light in weight. In 1949 U.S. astronomer Fred Whipple proposed that comets were made of ices and dust, and referred to them as "dirty snowballs." 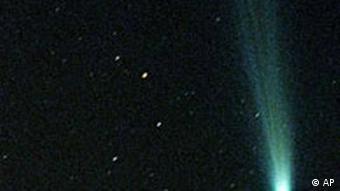 Why do comets leave fiery trails?

As a comet nears the Sun, some of the ice melts and transforms into gouts of gas -- the bright halo-like "coma" around its head. The gassy wake and dust loosened by the melting ice create a spectacular tail that is reflected in the Sun's rays and may stretch across millions of kilometers in space. Incidentally, the word for comet comes from stella cometa, Latin for "hairy star."

How big is a comet?

Although the head of a comet can be bigger than a planet, most are just a few cubic kilometers in size. The famous Halley's Comet, for instance, is only about 15 km long by 4 km wide (9 x 2.5 miles).

Where do they come from?

Most scientists say they are created at two locations on the fringes of the Solar System. Long-period comets - those which take at least 200 years to return -- are thought to originate in the Oort Cloud, an accumulation of gas and debris beyond the orbit of Pluto. Short period comets are believed to come from a ring of debris beyond Neptune's orbit called the Kuiper Belt. The theory says that the debris clusters together and is pushed into orbit by the gravitational effects of passing stars.

How many comets are known to exist?

Approximately 2,000 comets have been observed and recorded over the past 2,500 years. Even the ancient Greeks and Romans were fascinated by comets and described their appearance in great detail. The first-century astronomer and astrologer Ptolemy attributed great significance to the streaks of light: "The celestial phenomena called comets [cause] wars, heated and turbulent dispositions in the atmosphere, and in the constitutions of men." The birth of Jesus and Napoleon, the eruption of Vesuvius that destroyed Pompei in AD79 and the Great Plague of 1665 have all been linked with comets.

How often do comets appear?

The return time of comets varies. They follow elliptical orbits ranging from a few years to as much as 40,000 years. Hyakutake, a comet that was visible from Earth in 1996, returns every 10,000 years or so. The most famous comet, named after British astronomer Edmond Halley, reappears every 75 years. The last time Halley's Comet was visible from Earth was 1986. The return time of comets can change slightly when they orbit the Sun. Because they shed some of their mass through solar heating their path and revolution is effected.

What is special about the Rosetta comet?

Comet 67P/Churyumov-Gerasimenko, or C-G for short, is the official name for Rosetta's target in 2014. It orbits the Sun once every 6.6. years, but despite the relatively frequent fly-by, vvery little is known about it. In deep space, its faint image is often veiled by light from background stars, and during its passage through the inner Solar System, the glare of its coma obscures its nucleus. It is believed to be about four kilometers (2.5 miles) across. It is named after two Soviet astronomers, Klim Churyumov and Svetlana Gerasimenko, who first identified it in 1969. 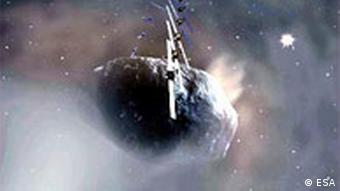 Rosetta was scheduled to meet up with the comet Wirtanen, before the original 2003 launch date was postponed and a new target was selected.

Why are comets so interesting for scientists?

Many astronomers subscribe to the "panspermia" theory which says that comets' volatile and complex carbon molecules may have helped seed life on Earth when they bombarded the planet during its infancy. Elements from these galactic bodies could have set off a chain reaction that created the building blocks for life, scientists believe. Many are hoping a close analysis of comets' material composition will provide answers to how life on Earth began.

Can a comet hit Earth?

Theoretically comets can pose a risk to life on Earth. A collision by a comet or large asteroid 65 million years ago is most likely to blame for the ice age and the extinction of dinosaurs. In 1992, the comet Shoemaker-Levy 9 was torn into 21 large fragments as it entered Jupiter's gravitational filed. In July 1994, the fragments smashed into the planet at speeds of about 210,000 kph (130,000 mph), releasing so much energy that they triggered fireballs larger than the Earth.

High winds postponed the launch of the Rosetta orbiter until Friday, but scientists are still optimistic of succeeding in the unprecedented attempt to land a spacecraft on a comet. (Feb. 26, 2004)