What are you looking at? Flinntheater examines stereotypes | Asia | An in-depth look at news from across the continent | DW | 05.10.2011

What are you looking at? Flinntheater examines stereotypes

What is the meaning of the color of a person's skin? What defines beauty? What difference does it make whether light or dark, black or white? These questions are examined in Sophia Stepf's newest play. 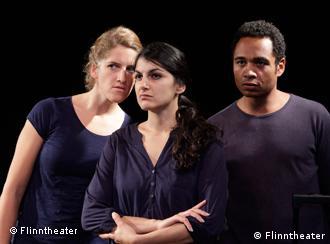 Toks looks African, Javeh Middle Eastern and Lisa like a northern European. Stereotypes come to mind as soon as the three actors appear on stage.

The three reveal themselves as actors looking for work. In Germany, Toks (Toks Körner), can only get cast as a refugee; despite his immaculate German, no one would cast him as Shakespare's Othello on a German stage. Javeh (Javeh Asefdjah), born in Tel Aviv, can only get victim roles. Lisa (Lisa Stepf), the light-skinned German, is simply too tall. In the characters' stories, stereotypes are examined and biases in German society are criticized.

On an empty stage the actors switch into multiple roles and fast-paced scenes, most of them so hilarious, that the audience is caught laughing at clichés most people would deny having in their heads. The actors keep looking at the audience, watching us as we watch them, creating an oddly uncomfortable atmosphere at times. Javeh's pain and suffering for being an "ugly outsider" comes to life when she portrays the ugliness of Shakespeare's Richard III. Her grief is so powerful that it lingers on for the rest of the performance. 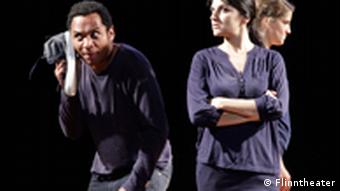 Identity and racism are major topics

In a clever narrative twist, the setting shifts to Mumbai and the three are thrown into the casting system of Bollywood. The Indian writers Irawati Karnik and Ajay Krishnan have contributed scenes, scripting the chances of failure and success for the trio in the Hindi film industry. Here Lisa, the white German girl, suddenly becomes the exotic one, whereas Javeh and Toks appear to fit right in, at least with regard to their skin color. But Bollywood is just as cruel as German television: Javeh continues to play roles of suffering women; Lisa has to show as much of her white skin as possible while Toks finds himself trapped within the stereotypes of Indian society – ridiculed for his skin color, which is too dark for Bollywood's taste.

The three actors, as different and special as each of them are, create a perfect team. With their moving stories and perfect timing, they navigate through the turbulent script with ease and skill, amazing the audience with the range of their craft. Lisa delivers a dazzling performance with her brilliant impersonation of an Indian cop. Toks amazes the audience as a master of the performed understatement, while Javeh elegantly balances fragility and aggression and ugliness. 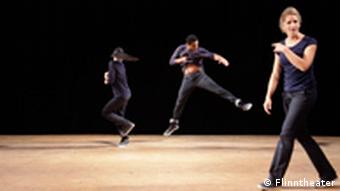 Moving, compelling and deep: the new play by Sophia Stepf

Director Sophia Stepf brings out all the qualities of her actors. She weaves their personal biographies and talents into the script while also referring to texts by Karnik and Krishnan to create a drama that sheds light on the racist sentiment that exist in our societies – in our media, in our heads. The music adds another layer of texture: composed by German musician Andi Otto, who spent four months in Bangalore, this sophisticated electronic soundtrack features samples of old Hindi films as well as South Indian singer MD Pallavi Arun.

The fast-paced, action-packed show might be a little bit overwhelming for an older audience but was much appreciated by a younger generation fond of consuming quick, witty, multi-layered media. It is a dramatic performance with a deep story that many will have to watch more than once to grasp every layer. The main point, however, is clear: We must rethink our ideas - existing clichés and stereotypes in our heads and ask ourselves what is behind dark and light, black and white, beauty and ugliness.

Apparently, the best place to buy antique art from China is Europe. More and more Chinese collectors are coming to London, Paris or Cologne to buy Chinese art at auction. Here they can be half-way sure it's authentic. (30.06.2011)

Visitor numbers are up at the Enlightenment art exhibition, but famous artist Ai Weiwei is still missing. His arrest has divided Germany's cultural establishment, with many calling for the show to be closed. (13.05.2011)

Sidney Poitier, known for classics like "A Raisin in the Sun" and "In the Heat of the Night," was the first Black man to win an Academy Award for best actor. The renowned actor and director has died at the age of 94.

A Berlin exhibition explores the buzzing heyday of Beirut's arts scene in the 1960s, and how it was cut short by the darkness of the Lebanese Civil War.