Germany's foreign minister has said that Egypt’s violence could escalate into civil war. EU leaders have condemned the violent response to protests in several Egyptian cities, which has led to loss of life. 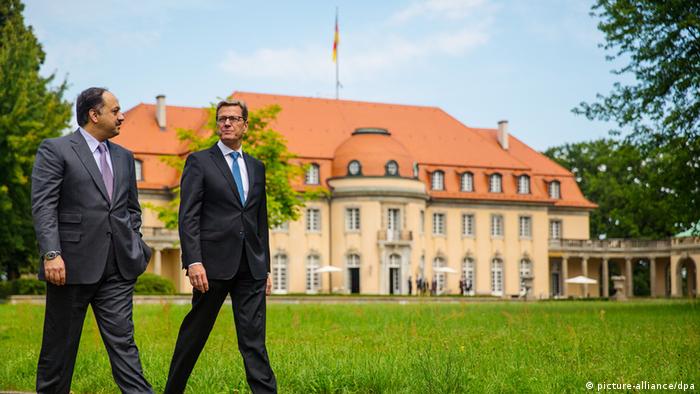 Foreign Minister Guido Westerwelle told reporters in Berlin that any talks to safeguard the stability of Egypt should include senior figures from all sides. Westerwelle (right in photo) spoke Saturday after meeting with Mohamed Al-Attiyah (left) the foreign minister of Qatar.

Reports of altercations between security forces and protesters prompted an immediate pledge from leaders across the European Union to deliberate over how to respond to the crisis in Egypt in coming days.

EU foreign policy chief Catherine Ashton called the deaths "shocking": "I have asked member state representatives to debate and coordinate appropriate measures to be taken by the European Union in response to the situation in Egypt," she said.

In light of raids on supporters of former President Mohammed Morsi, which have killed 600 people, European leaders spoke about a coordinated EU response to the violence in Egypt and agreed that the bloc's foreign ministers should meet next week to discuss the issue.

On French television, Foreign Minister Laurent Fabius said the EU would look at all options available, including a possible suspension of aid to Egypt.

The German government announced that Chancellor Angela Merkel had told French President Francois Hollande that her country would "re-evaluate" its relations with Egypt. Germany has also frozen its aid to the country as events unfold.

The Foreign Ministry, headed by Westerwelle, urged citizens to refrain from traveling to Egypt, extending a previous warning to include Red Sea beach resorts around Hurghada and Sharm El-Sheik. Germans already in beach resorts should keep vigilant and stay in close touch with hotel management and travel agents, the ministry advised. According to the German Travel Association, most travel companies in the country have canceled all bookings to Egypt until Sept. 15.

The German government announced that it would suspend 25 million euros ($19 million) in aid to Egypt for climate and environmental protection works, and, according to Development Minister Dirk Niebel, approve no funding for new projects for the time being.

France's Hollande also discussed the violence with Italian Premier Enrico Letta and British Prime Minister David Cameron. Fabius, France's foreign minister, said that he had raised his country's alert level for Egypt on Friday, "formally discouraging" citizens from traveling there. He said that meant, for example, that French tour operators would no longer take tourists to the country.

Fabius also encouraged French people already in Egypt to avoid big cities. Like Westerwelle, he said that Egypt appeared close to civil war: "It's in chaos."

President Barack Obama said the US would cancel a joint exercise with the Egyptian military, but stopped short of suspending an annual $1.3 billion in aid.

In a televised statement, Abdullah called for honest people and intellectuals "to stand firmly against all those who try to shake the stability of a country that has always led the Arab and Islamic worlds."

In Turkey, however, officials have kept up their criticism of the military government's crackdown, with President Abdullah Gul saying that "all that happened in Egypt is a shame for Islam and the Arab world." Late Thursday, Turkey and Egypt recalled their ambassadors for consultations as the relationship between the countries worsened.