Media in the GDR was entirely state-controlled and western journalists were seen as a threat to the socialist system. But were they really? How much did the media have to do with the fall of the Berlin Wall? 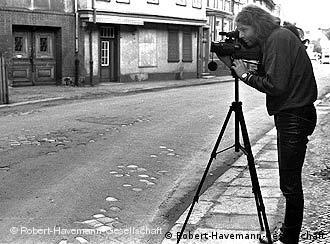 In the mid-1980s, the weekly magazine Der Spiegel ran a story about a family from Hesse, West Germany, who had packed their bags and tried starting a new life as pub owners in East Germany. They got as far as the border, where they were stopped by guards. "Are you unemployed?" one asked, with barely concealed astonishment.

The story was reported by Ulrich Schwarz, former GDR correspondent at Der Spiegel. Shortly after the story ran, it was quoted in the GDR Foreign Ministry.

"I was then told that I had not been granted permission to visit the border crossing," Schwarz remembered. "I told them they should issue an official warning and that we would run a story in the Der Spiegel saying that our correspondent was reprimanded even though he filed such a positive story about the GDR! Then they dropped the matter." 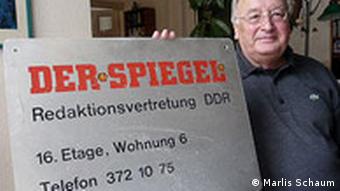 In fact, the GDR had always taken a dim view of Der Spiegel. The weekly current affairs magazine was banned in the GDR and its office in East Berlin was even closed down by the SED, the communist party, between 1976 and 1985 after it published a critical essay submitted by a dissident group.

"The GDR was quite a challenge to foreign correspondents," said Schwarz. "Apartments and offices were bugged, and the secret service even recorded conversations I had with visitors in my front room. Whenever I crossed the border on Heinrichstrasse from West Berlin I felt like I was entering enemy territory."

He wasn't being paranoid. The ruling SED and its secret police, known as the Stasi, maintained tight control of the East German media and were determined to keep West German journalists equally in check. West German media only began sending correspondents with permanent accreditation to East Germany in 1973. Permission to take any trips outside East Berlin had to be applied for 24 hours in advance, and all reports needed to be registered with the Foreign Ministry.

The Ministry for State Security kept a secret file on every single West German correspondent, and had a host of informers keeping tabs on their every movement. 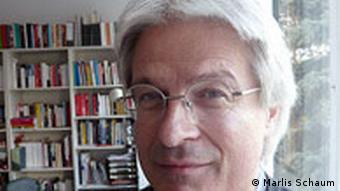 "All their official contacts were either Party members or undercover Stasi agents. It's fair to say there were roughly 15 to 20 informers attached to every accredited journalist," said Jochen Staadt, an expert on the SED at the Freie Universitaet, in Berlin.

Radio and TV reporters were considered especially dangerous. In 1973, the SED officially banned the public from watching West German television. Unofficially, however, it was tolerated -- so East Germans with televisions were able to learn everything their leaders kept them in ignorance of, from the country's chronic pollution to the dilapidated state of its cities.

For information on sensitive subjects, many of the West German journalists relied on private citizens such as Siegbert Schefke and Aram Radomski, both in their late twenties. Dissatisfaction with the regime prompted them to begin supplying Western journalists with information and film footage in the mid-1980s.

Among the events they caught on tape were the now legendary Monday demonstrations in Leipzig. On Oct. 9, 1989, they took up position in the bell tower of a church, ignored the pigeon droppings and filmed 70,000 GDR citizens taking to the city streets to protest against the SED regime. They gave the material to Ulrich Schwarz, who delivered it to the desk of Der Spiegel in Hamburg.

The following day, East Germans citizens tuned in to West German TV and heard the true version of the "drunken rowdies in Leipzig" story that had been reported by the East German media.

"We alerted the public to what was happening in Leipzig, and that most certainly helped trigger further protests in the GDR," says Aram Radomski today. "But I think one is only ever one piece of a much larger puzzle."

Jochen Staadt from the Freie Universitaet in Berlin believes that along with the steady stream of East Germans to the West, West German television and radio were the final nails in the coffin of the SED regime.

"To those who were unable to leave the country, the constant awareness of this parallel world and the information on world affairs provided by TV, which was at odds with the propaganda peddled by East German media, were the reasons why the events of 1989 came about," he said.

And in turn, the GDR media -- albeit indirectly -- also brought about the fall of the Berlin Wall through its failure to report on anything the public actually wanted to know about.

"The Western media consumed in the East helped spur on the masses: They saw what an effect they could have, and they also realized how ineffectual the system was," said Harald Haendel, who worked as a reporter for East German TV in the 1980s. "None of us saw this peaceful revolution coming, and I believe it would never have happened had the West German media not reported on it, while the East German media ignored it."