Regional leaders from the ECOWAS group of countries have called for elections in Guinea following a military coup. It is the second country in the region now under the rule of a junta. 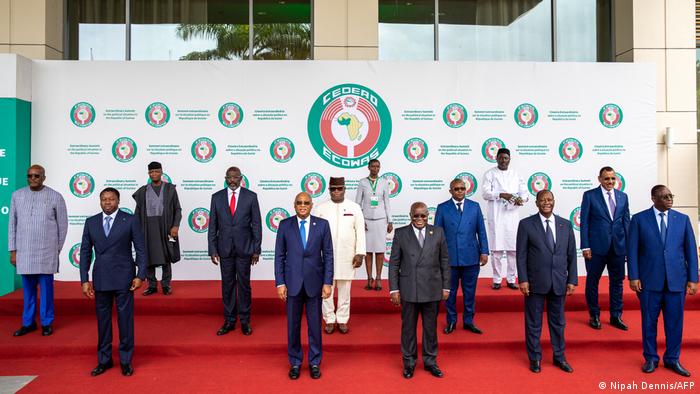 Leaders from 14 of the 15 Western African countries in the ECOWAS regional group met in the Ghanaian capital Accra on Thursday to discuss their approach towards Guinea after it was suspended following a coup there earlier this month.

The Economic Community of West African States decided to freeze bank accounts and introduce travel bans for the junta members and their families. They called on the junta to hold elections within six months and release President Alpha Conde from detention. He was ousted on September 5.

Representatives from the regional group produced a report after meeting earlier in the week with coup leader Mamady Doumbouya — a former member of the French Foreign Legion.

"We are required to take informed decisions on these matters," Ghana's President Nana Akufo-Addo, the current chair of ECOWAS, said at the start of the summit. "I count on your excellencies to help proffer durable solutions to the crisis."

The coup in Guinea has stoked fears of further political instability in the region following the two coups that took place in other member state Mali since August last year.

ECOWAS had already been pressuring the military junta in Mali to pursue a democratic transition. Similar processes have begun with Guinea, but the coup leaders there were unlikely to discuss a timetable yet, Ghana's Foreign Minister Shirley Ayorkor Botchwey said on Wednesday.

Botchwey, who led the bloc's 15-member delegation visiting Guinea, also raised the possibility of sanctions against the West African country.

ECOWAS President Jean-Claude Kassi Brou said after the emergency summit on Thursday that the group had indeed imposed sanctions on Guinea and that the member states insisted there was no "need for very long transition for the country to return to democratic order."

Economic sanctions were imposed on the junta in Mali last year, but they were, subsequently, lifted after it committed to holding democratic elections in February 2022. With the military still in power, the prospect of next year's elections has become dimmer.

Following the announcement of sanctions in Guinea, Kassi Brou also announced new sanctions against those it deemed to be impeding the return to democratic, constitutional rule in Mali, Reuters reported.

The outlook for a return to constitutional rule in Guinea is similarly unclear. The military coup took place following mass demonstrations against President Conde's controversial new constitution that allowed him to run for, and win, a third term last October.