With almost a billion people worldwide going hungry, the German aid organization Welthungerhilfe has warned that the financial crisis should not push their suffering in the background. 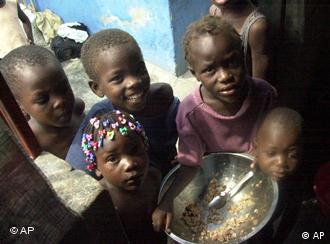 Unlike the banks, hungry children aren't to blame for their misery, said Schäuble

"Close to a billion starving people -- that's a disgrace for humanity," the organization's chair, Ingeborg Schäuble, said on Tuesday in Berlin. "Unlike the banks, they are not to blame for their misery."

She added that the current hunger crisis is "far worse" than the financial crisis.

"If the global hunger crisis were taken as seriously as the crisis in the financial markets, we would have found a solution long ago," she said. "And yet it is much worse and poses a threat to millions of lives."

According to the index, which is based on the three variables of malnutrition, underweight children and child mortality, 33 countries are currently registering "alarming" or "extremely alarming" levels of hunger. Some 923 million people -- one in six people on the planet -- go hungry every day. Of that number, 907 million live in developing countries.

Schäuble said that an additional 10 billion euros ($13.7 billion) in aid was necessary to combat the situation.

"We're calling for a bailout package for the hungry," she said.

The UN General Assembly will review efforts to eradicate poverty and hunger next week, just as the world economy is slumping and high food prices have stripped the poor of their purchasing power. (21.09.2008)

Opinion: We Can't Afford to Lose the Fight Against Hunger

Agriculture is finally back on the world's agenda, but it will still take a concerted effort to fight hunger, said DW's Susan Killick, reporting from the UN food security conference. (05.06.2008)

European Union countries reiterated their promise to increase the amount of aid they give to developing nations, as spiraling food prices threaten their pledge to halve world hunger by 2015. (28.05.2008)