A Website launched in Pakistan uses crowd-sourcing technology to voice the needs of hundreds of flood victims seeking food, water and shelter. It's also helping coordinate the provision of aid in the flood disaster. 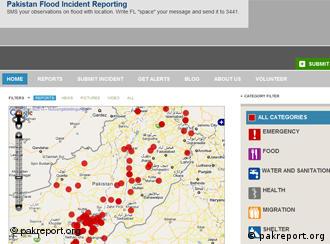 Incident reports received by text message are mapped on PakReport.org

A Web site designed to organize information from people directly affected by disaster has launched in Pakistan. PakReport.org is the latest deployment of the Ushahidi crowd-sourcing platform and is run by a handful of volunteers in Islamabad who want to help the victims of Pakistan's floods.

"We convey the voice of the people to world," PakReport founder Faisal Chohan in Islamabad told Deutsche Welle.

The public is encouraged to report incidents via e-mail, Twitter, the Web and more recently by text message. Mobile phone use is widespread in Pakistan and many of the people affected by the floods still have cellular service, which allows them to contact the site without having to access the Internet.

Hundreds of postings ask for help

Hundreds of stranded Pakistani flood victims have already posted pleas for help, like this one from a person located in one of the worst affected areas: 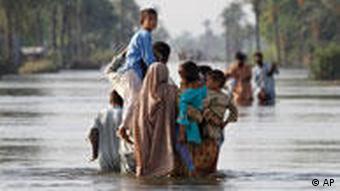 Millions have been affected by flooding in Pakistan

"50 families stranded near Qaim Bharwana 'Bund' 400-500 people. There is nine feet of water. There are diseases, and now without food. The camp in town does not have anything! URGENT food and medical relief needed!"

Some posts report on condition in villages or on new outbreaks of cholera and other diseases. Other post attempt to organize rescue missions for stranded friends and family. A post from Rajanpur requests medical assistance and sanitary materials for women who had just given birth in the aftermath of the flood.

With 18 million people displaced by the floods in Pakistan, PakReport could become one of the most ambitious uses of online and mobile phone technology in disaster relief yet, according to Chohan.

To make a report, a person sends a text message to the number 3441, starting with the letters "FL" for flood relief. The PakReport team then plots the incident on a Google Map. The idea is to then convey this information to established relief agencies or community taskforces that will deliver help.

During the Haiti earthquake relief efforts, the Ushahidi platform was deployed and worked with several aid agencies, including the World Food Program and the International Red Cross. The groups shared information submitted to them by the public, which contributed to coordinating the relief effort, according to Patrick Meier, director of crisis mapping at Ushahidi.

"The Haiti and Chile deployments of Ushahidi are now directly supporting the efforts in Pakistan with many lessons learned and best practices learned from these previous efforts," he said.

PakReport is currently meeting with representatives from the World Food Program and OACHA, as well as Internews in order to create similar partnerships.

Working together: coordinating the relief effort 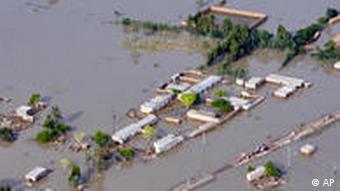 Chohan said the role of these user generated platforms is to fill the gap left by the cumbersome aid industry.

"Right now we are seeing a lot of anger from the people towards government and aid agencies," he sad. "Aid is not getting through."

However, not everyone in the aid business agrees that user-generated content collated by sites like PakReport is as valuable to the relief effort as the site's developers claim it is.

"It's not just about having a computerized way of gathering data after a disaster," Marcal Izard, a spokesperson from the International Red Cross on the Haitian deployment, told Deutsche Welle. "That data can be useful, yes, but you still need people, experts with knowledge on how to react and what to do with that data."

"We can operate just as quickly as Ushahidi in getting information on the ground," he said. "We had over 60 staff in Haiti, people who had lived there for five to 10 years - but we also have the advantage of quality control over that information."

Izard said it is not always advantageous to put information about disaster and conflict areas online for the world to see.

"For instance, the ICRC does a lot of work in war zones," he said. "There are military concerns for not mapping those areas and putting it on the Web. We could get people pretending to be humanitarians when in fact they are trying to influence where aid is being distributed."

The future of humanitarian aid relief? 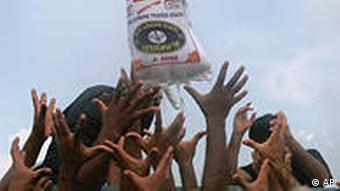 The Ushahidi open-source platform, which was developed during the civil war in Kenya in 2008, could be useful in the future if it is used to obtain feedback from people who have received aid but are in geographically remote or politically inaccessible places, Izard said.

"For example, if we went to Somalia to deliver rice for their crops it would be good to see how useful that aid was to the people," he said. "Did it grow in the rainy season, or did it fail. Do they need more?"

However, PakReport's Chohan said he thinks open-source data systems will revolutionize the way aid is provided by organizations like the UN in the future.

"Even if we only reach one percent or five percent of the people who need help in Pakistan, there are 18 million of them so it is still a huge number," he said.

Hundreds of thousands of people in southern Pakistan have been forced to flee after the swollen Indus river breached an embankment in the province of Sindh. (27.08.2010)

The winners of the Deutsche Welle Blog Awards were announced Thursday. The prize "Best Weblog" was awarded to Ushahidi.com, a team of Africans and Americans who developed a community-based software program. (15.04.2010)

Mapping the disaster with text message reports of victims

Listen to the DW report on Pakistan online reporting