Learn a funny, quirky German word each week with DW's Word of the Week feature. This week: Warmduscher. 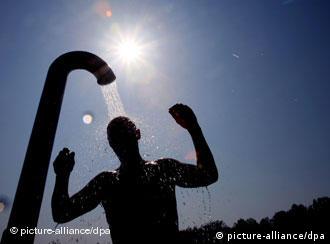 "You take warm showers!" Believe it or not, in German, this put-down phrase is said in one word. "Wimp" or "pansy" are similar expressions in English. Popular German comedian Harald Schmidt brought the term into the limelight during the 1998 soccer World Cup, when he called Jürgen Klinsmann, then a player on the national team, a Warmduscher. Regardless of Klinsmann's preferred shower temperature, the German Soccer Association promptly sued the comedian and won. The jab, however, had already made its way into the vocabularies of countless Schmidt fans across Germany. Web sites sprung up soliciting synonyms of Warmduscher. "Soft egg," "light beer drinker," and "cough drop sucker" are just a few unkind examples.