A controversial memorial to honor people who died while trying to flee the former East Germany by crossing the Berlin wall was demolished early Monday despite fears that the action could harm the city's image. 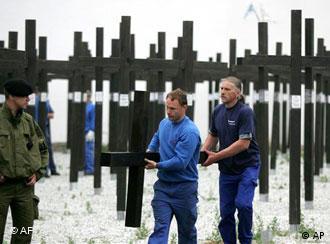 Police secured the removal of the 1,065 wooden crosses on Tuesday

To prevent the demolition, protesters -- some of whom had been imprisoned by the East German regime -- had chained themselves to a few of the 1,065 wooden crosses that stood near the former Checkpoint Charlie border crossing between sections of a fake Berlin Wall. 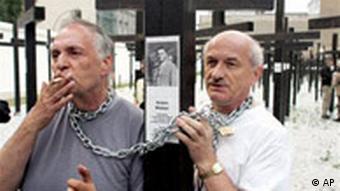 Two of the protesters who chained themselves to the crosses

But police officers cordoned off the area to let construction workers begin to dismantle the field of crosses and two mock slabs of the Berlin Wall erected in memory of those who died attempting to escape communist East Germany.

The forced removal of the display came about because the memorial's initiator had refused to take it down despite demands by the land owners to do so. Alexandra Hildebrandt, who also runs the nearby Checkpoint Charlie museum, insisted on keeping the crosses even though she had lost the lease on the land.

No money from Bush 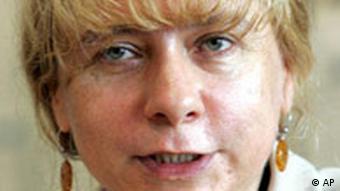 Hildebrandt had tried to come up with millions of euros to buy the land, even reportedly writing to US President George W. Bush to help her keep the memorial intact.

The demolition was opposed by several groups, including the representatives of Republicans Abroad and several members of Berlin's opposition Christian Democratic Union. The city's tourism head had also voiced his concern that removal would not help the city as thousands of tourists visited the site each day. 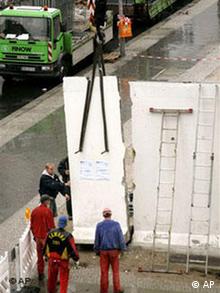 The removal was reminiscent of 1989

But the city's government, which consists of Social Democrats and the Party of Democratic Socialism, the successor party to the former East German communist party, never saw the privately organized memorial as part of Berlin's concept to remember the Wall.

City officials plan to build a Cold War museum near the site while an official Wall memorial already exists on Berlin's Bernauerstrasse.

A recent proposal for a nationwide "memorial concept" to jointly honor victims of the Soviet occupation, the East German regime as well as victims of the Nazis has unleashed a storm of protest. (June 19, 2004)

A controversial Berlin Wall memorial near the famed Checkpoint Charlie museum is set to be razed. While the museum director is fighting to save it, tourism experts fear the demolition could damage Berlin's image. (June 30, 2005)