Virginia battle over felons' rights could swing US election

Amid a heated debate on racial biases in the US justice system, Virginia's governor has restored voting rights for former felons. For some, he is correcting a historic wrong. For others, he is overstepping his authority. 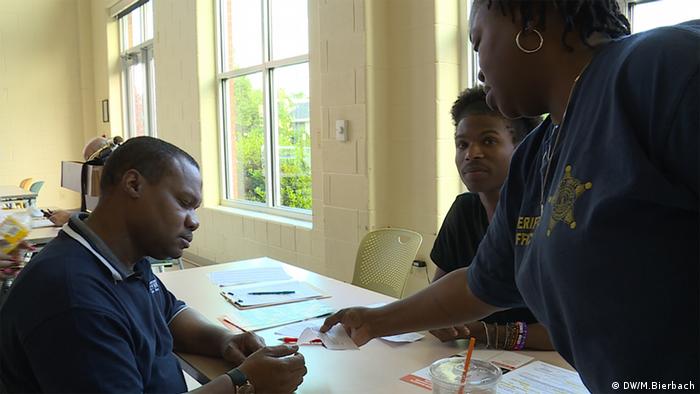 The day Barack Obama was first elected president was bittersweet for Terry Garrett. As an African-American whose parents grew up in a segregated South, she was joyous as she witnessed the moment Americans elected the first African-American president. But she also felt angry, sad, left out. That day Terry had watched her children and husband cast their ballots, knowing she would not be allowed to do the same. The 48-year-old from Alexandria, Virginia, has never been allowed to vote. By the time she reached voting age, 18, she had been convicted of shoplifting. Centuries ago, her home state had forbidden people who committed a felony from voting.

But this April, Virginia Governor Terry McAuliffe issued a sweeping executive order restoring the voting rights of all former felons who have completed their jail sentence and parole or supervised probation.

Now, Terry hopes that she will be able to vote for the first time in her life this November. As a newly registered Democrat, she is hoping to elect another "first" president into office - the first female president, Hillary Clinton. 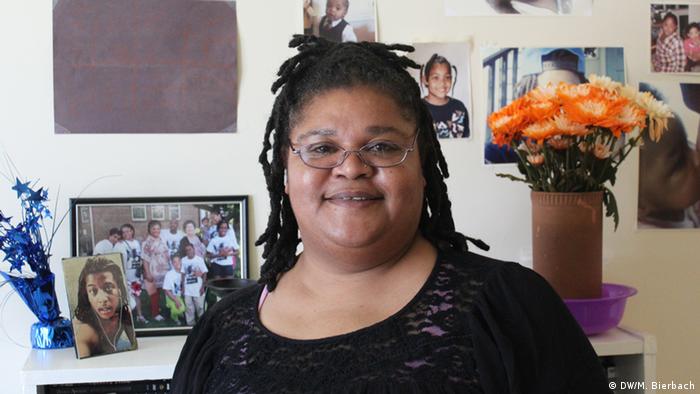 Terry Garrett wants the rights of a citizen despite her past

While the Virginia state constitution forbids felons from voting, it grants the governor the "power to remove political disabilities consequent upon conviction for offenses." The executive order Democrat McAuliffe issued is the most extensive interpretation of this power yet - granting 206,000 former felons the right to vote. If enough of these newly eligible voters register to vote and the order withstands the scrutiny of two lawsuits, political power in Virginia - and the entire country - could shift. As a swing state, Virginia has a large impact on presidential and congressional elections.

The US not only has one of the highest incarceration rates worldwide but also more restrictions on the voting rights of those convicted of a crime than most other democracies. An estimated 5.85 million Americans may not vote due to felony convictions. Three states - Florida, Iowa and Kentucky - deny those convicted of a felony the right to vote for life, while most states deny that right when a felon serves a jail sentence or is on parole. Only two states - Maine and Vermont - have no restrictions at all.

Many countries, including Canada, France, Japan and Sweden, allow felons to vote even while incarcerated. In Germany, courts may, but only rarely do, impose voting-rights restrictions on individual felons for a maximum of five years.

Disproportionally many of those who have been incarcerated in Virginia - and in the US overall - come from low-income households and are African-American. About 45 percent of the newly eligible voters, but only 19 percent of Virginia's population, are black. Until April, one in four African-Americans in Virginia was not allowed to vote because they were convicted of a crime.

Governor McAuliffe has argued that his order counters the systematic disenfranchisement of black Americans in Virginia. Virginia was a slave state and had a poll tax until the 1960s, de facto excluding many poor people and African-Americans from voting by requiring citizens to pay a fee to register to vote. 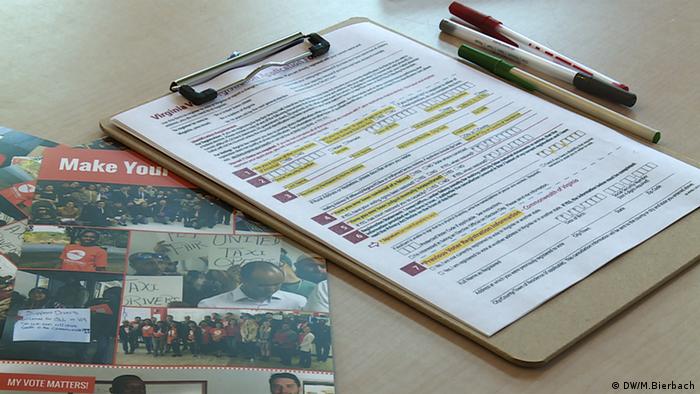 The debate over the governor's order has made national headlines amid an intense debate over racial biases in the US justice system and harsh sentencing policies that disproportionally affect African-Americans. While progressives have embraced McAuliffe's order, Republican lawmakers - who hold the majority in the state congress - have criticized the order harshly.

Progressive groups are currently racing to sign up as many of the newly eligible voters as possible. So far, 9,464 former felons have registered to vote, a requirement for all citizens who wish to cast a ballot. One of the biggest contributors to the increasing numbers is the organization New Virginia Majority, which holds voter registration drives and sends volunteers to canvas in urban, low-income neighborhoods. 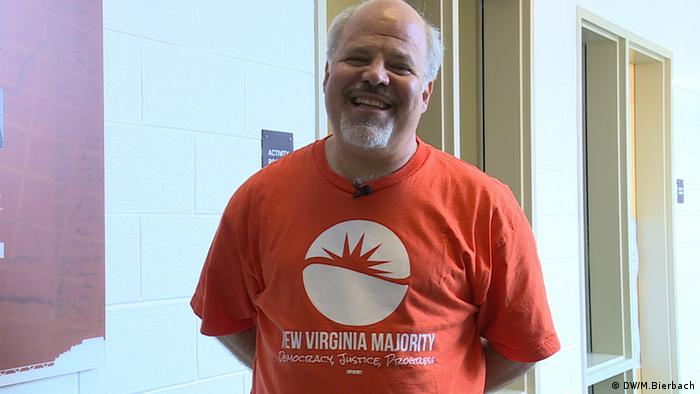 Restoring former felons' voting rights is about making Virginia more inclusive, says Executive Director Jon Liss. "We're struggling to fulfill the promise of democracy. It's really about what kind of society you want to have: Is it an inclusive society, a democratic society? Are all people involved in making decisions?" says Liss. "So, it's a real step towards a real and more full democracy."

Governor and congress at odds

But to others, the governor's order is about making Virginia more Democratic with a capital rather than lowercase "D." Two lawsuits have been filed against McAuliffe's order - one by a conservative legal foundation, the other by prominent Republicans in the state congress. Both suits allege that by circumventing the Republican-majority state legislature through an executive order, the governor has overstepped his authority.

Lawyer Michael Kirk represents the suit filed by Republican lawmakers. Kirk argues that the issue is not whether felons should be allowed to vote, but whether the governor is allowed to issue a blanket restoration of voting rights. He believes the governor is effectively changing the state's law because his order nullifies the ban on felons voting. According to Kirk, "the correct way to do it would be to amend the constitution," which only the state legislature can do. 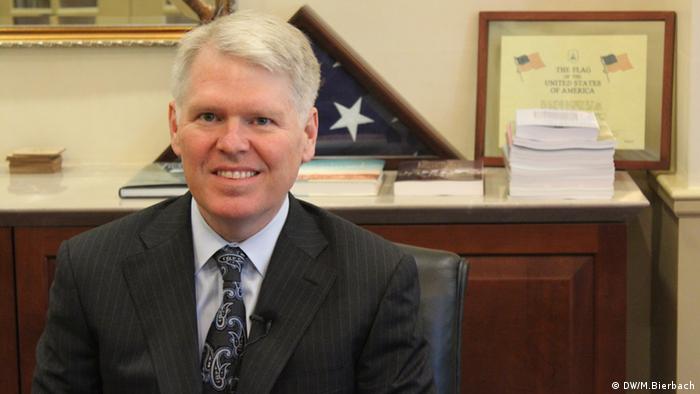 Lawyer Kirk says the governor has overstepped his office

However, an amendment to the constitution seems unlikely in the near future, given that Republicans hold a majority in both houses. McAuliffe's predecessor, Republican Bob McDonnell, reportedly urged the state congress to pass a constitutional amendment but failed due to opposition from his party.

The Virginia Supreme Court will hear the case filed by Republican congressmen this month. If the order is upheld, it will likely remain in effect at least until Governor McAuliffe leaves office in 2018. If the order is found to be unconstitutional, former felons could be erased from voter registers in time for the November election.

More than just casting a ballot

For Terry, being able to vote is about more than just casting a ballot: It also signifies that the work she put into reintegrating herself into society is recognized. After struggling with drug addiction for decades, Terry has been in recovery for 10 years now. She has worked hard to become a good role model to her children, her grandchildren and other women who struggle with addiction.

"I think I should have the right to vote because I have a voice. I have an opinion," she says. "I just want to be considered a citizen, regardless of what I've done."

Dallas is the latest battlefield in the United States

As activists continue to protest police violence in the US and Dallas mourns the loss of five officers, many Americans have questioned how the country might move forward after the latest killings. Ines Pohl reports. (10.07.2016)

South Carolina plays a crucial role in choosing the president, partly due to its sizeable black population. Richard Walker reports from the state where a church massacre and police brutality have underlined differences. (26.02.2016)

A dream deferred? Race relations in the Obama era

Amid racial tension and violence, Obama has addressed the oldest African-American civil rights organization in the US. For some, his increasingly frank talk about race is too little, too late. Spencer Kimball reports. (14.07.2015)

Democrats have retaken leadership in New York City and Virginia. However, a Republican with potential presidential hopes won re-election easily in New Jersey. (06.11.2013)

In a major setback for US President Joe Biden's Democratic Party, Glenn Youngkin is poised to become the first Republican to win statewide office in Virginia since 2009.

Virginia governor race could have consequences for Biden 02.11.2021

The US state of Virginia is set to elect a new governor. Democratic former Governor Terry McAuliffe was expected to win, but his Republican rival, Glenn Youngkin, has put the race in a dead heat, which could have consequences for President Joe Biden.

Two voting rights bills are currently being blocked from debate by Republican senators. The legislation would represent the biggest overhaul of the US electoral system in a generation.