Venezuelan President Hugo Chavez has died in a Caracas military hospital. The constitution says elections must be held within 30 days. 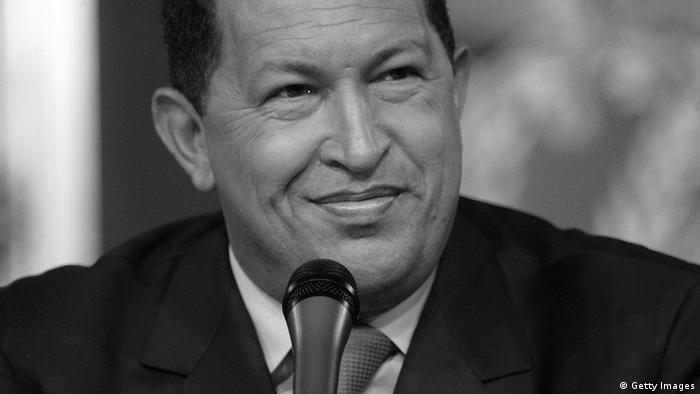 Venezuela's long-time president, Hugo Chavez, has died, according to Vice President Nicolas Maduro, who made the announcement in a televised speech Tuesday evening local time.

"We have received the hardest and most tragic news that…comandante President Hugo Chavez died today at 4:25 pm," said Maduro.

According to the news agency AFP, Maduro also announced the immediate deployment of military troops "to accompany and protect our people and guarantee the peace."

The government had never disclosed the exact nature, location or severity of Chavez's cancer, announcing only that it was in the pelvic region. By late Monday, however, the government said that the 58-year-old president was severely ailing in the Caracas military hospital where he has been since returning from Cuba in mid-February.

"Currently, he has a new and severe infection," Information Minister Ernesto Villegas had announced late Monday local time, adding that there was a "worsening of respiratory function" and that Chavez's condition was "very delicate."

"Comandante Chavez continues to cling to Christ and life, conscious of the difficulties that he is facing and strictly following the program designed by the medical team," Villegas said, ending the statement with "Long live Chavez!"

Chavez had been mostly out of sight for three months, having left for Cuba in December and returning on February 18, but spending his last days under care. Known for his sweeping speeches, Chavez in the end breathed through a trachea tube.

The opposition had grown impatient with the lack of news about the president, who was re-elected to a new six-year term in the fall but could not be sworn in in January because he was undergoing treatment in Cuba, and several politicians had accused the government of lying about Chavez's condition. Hundreds marched of citizens marched on Sunday, demanding transparency about the president's health.

What they'd gotten before then was little: a February 15 picture of Chavez with his daughters in the Havana hospital reading Granma, the official organ of Cuba's communist party, or a twilight-hours tweet three days later, when the president finally made it home. "We have arrived again to the Venezuelan homeland," Chavez wrote on Twitter. "Thank you my God!! Thank you my beloved people!! We will continue the treatment here."

Vice President Maduro, his chosen successor, and other senior officials had lashed out at the opposition and any rumors that Chavez may be dead or dying, calling it all part of a campaign to destabilize the nation. Villegas, the information minister, right at the end even called the rumors "psychological war deployed by foreign laboratories with spokespeople in the corrupt Venezuelan right who seek to generate violent scenarios as a pretext for a foreign intervention."

In his final message on Twitter, which turned out to be February 18, the day he returned home, Chavez wrote: "I continue clinging to Christ and confident in my medicine and nurses. Onward to victory forever!! We shall survive and we shall overcome!!"

US President Joe Biden signs series of orders, including rejoining of Paris climate accord 6m ago

German Chancellery: 'Very, very good sign' that Biden will rejoin WHO 20m ago

Opinion: Joe Biden is the right US president for the moment 36m ago