Vatican stands by pope amid calls for resignation | Europe | News and current affairs from around the continent | DW | 27.03.2010

The Vatican has once again dismissed media allegations that Pope Benedict XVI helped cover up sex abuse as mounting criticism from lay reform movements resulted in a call for the pontiff to step down. 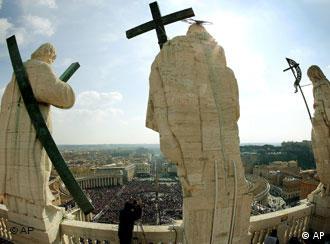 The Vatican is facing renewed pressure over sex abuse

The New York Times reported that during his tenure as archbishop in Germany, Pope Benedict didn't prevent a known pedophile priest, Reverend Peter Hullerman, from being transferred to a new parish.

"The then archbishop had no knowledge of the decision to reassign (Hullerman) to pastoral activities in a parish," the Vatican said in a statement on Friday, March 26, adding that it "rejects any other version of events as mere speculation."

The current pope greenlighted in 1980 Hullerman's transfer to the Bavarian capital, after he had sexually abused an 11-year old boy in his previous parish. 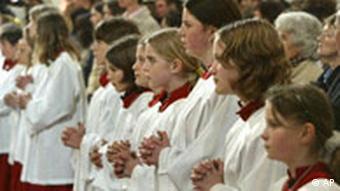 The priest was supposed to undergo therapy but was soon working with children again. Six years later, in 1986, Hullerman was found guilty of molesting boys in another Bavarian parish.

According to the New York Times, the pontiff - then Archbishop Joseph Ratzinger - had received a memo about the priest's reinstatement for pastoral work. The Munich diocese, however, denied Ratzinger carried any responsibility in the case.

"We stand by our account that Cardinal Ratzinger didn't know about this decision," diocese spokesman Bernhard Kellner told the Reuters news agency. "An archbishop doesn't read all the administrative acts. He just can't. That's why he has a vicar general."

What should the pope do?

While European Catholic leaders rallied behind the pope, the chairman of the Austrian section of the international Catholic reform movement "We are Church" called on the pope to consider stepping down.

"If the pope wants to be consistent in asking bishops to resign, he should ask the same from himself," said Hans Peter Hurka.

According to Hurka. the current scandals raised the question "whether someone who knew about the problems becomes an accessory if he fails to act."

Like the pontiff's native Germany, Austria too has been rocked by a numerous sex abuse allegations against members of Catholic clergy.

The German section of "We are Church" has stopped short of asking for the pontiff's resignation, but has called for a clear confession.

Spokesman Edgar Buettner said, the "Church can not simply talk its way out of this." He said the pope had to face his own responsibility for failing to act in those cases.

Earlier this week, the Vatican already had to defend the pontiff for failing to act on a pedophile priest in the US when Ratzinger - who was elected pope in 2005 - was a top official in the Vatican.

US bishops had repeatedly warned the Vatican about the priest who sexually abused up to 200 deaf children between 1950 and 1974.

As the latest sexual abuse scandal in the Catholic Church gets uncomfortably close to the pope, questions of punishment versus apology in dealing with pedophile priests have once again emerged. (25.03.2010)

The head of the German Bishops Conference, Archbishop Robert Zollitsch, has admitted that the Roman Catholic Church consciously covered up cases of sexual abuse for decades. (21.03.2010)

In a letter to the Irish Catholic Church, Pope Benedict XVI apologized to sexual abuse victims. Germany's top archbishop said the letter was also relevant to the crisis in his church. (20.03.2010)