US stings German-Chinese honey-smuggling scam | Germany| News and in-depth reporting from Berlin and beyond | DW | 02.09.2010

In what officials say is the biggest food smuggling case in American history, US prosecutors have announced charges against 10 German executives for illegally importing tainted Chinese honey. 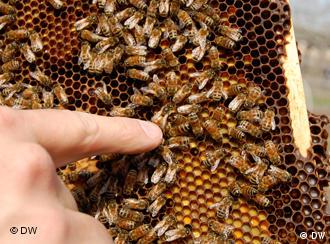 United States justice officials filed charges against one Chinese and 10 German executives on Wednesday for illegally importing millions of dollars worth of tainted Chinese honey.

At the center of the conspiracy is Hamburg-based food conglomerate Alfred L. Wolff. The company allegedly conspired with Chinese honey producer and exporter QHD Sanhai Honey to circumvent US anti-dumping laws.

The charges, filed in Chicago where Alfred L. Wolff's US honey-importing enterprise is based, claim the company bought low-cost honey from multiple Chinese suppliers and sent it to various countries to filter any impurities that would link the honey back to China. They then allegedly distributed the honey in the United States under false labels, saying it came from other countries.

"The charges allege that these defendants aggressively sought and obtained an illegal competitive advantage in the US honey market by avoiding payment of more than $78 million (60.9 million euros) in anti-dumping duties, and while doing so deliberately violated US laws designed to protect the integrity of our food supply," Patrick Fitzgerald, the federal attorney prosecuting the case, told reporters in Chicago on Wednesday.

No fears of injury or illness Fitzgerald said the companies dodged more than $78 million in duties

The charges claim 606 illegal shipments of honey took place between March 2002 and April 2008, totaling $39.5 million. The US Justice Department is seeking that amount in restitution, as well as the more than $78 million that it says are owed in duties.

Some of the honey may have also included antibiotics that had not been approved by US regulators, although Fitzgerald stressed that there was "no reason to believe that any of the honey involved in this case had led to any injury or illness."

Six of the total 15 defendants have been arrested and the United States is pursuing extradition for the rest, Fitzgerald said.

European Union regulators have banned imports of soy-based foodstuffs for infants and young children from China after the toxin melamine was discovered in soybean meal, officials in Brussels said Wednesday. (04.12.2008)

Experts say EU toy safety standards may not be enough

In anticipation of the annual Nuremberg Toy Fair, which kicks off on Thursday, Feb. 7, consumer groups and manufacturers disagreed on whether the announced overhaul of EU toy safety rules went far enough. (07.02.2008)

The European Union's top consumer affairs official is flying to Beijing on Saturday following a host of concerns about the safety of products imported from China. (21.07.2007)