US: Shooter kills 8 and himself at FedEx facility

Indianapolis police said they believe the suspected gunman shot and killed himself after the incident. Multiple other people were injured in the shooting. 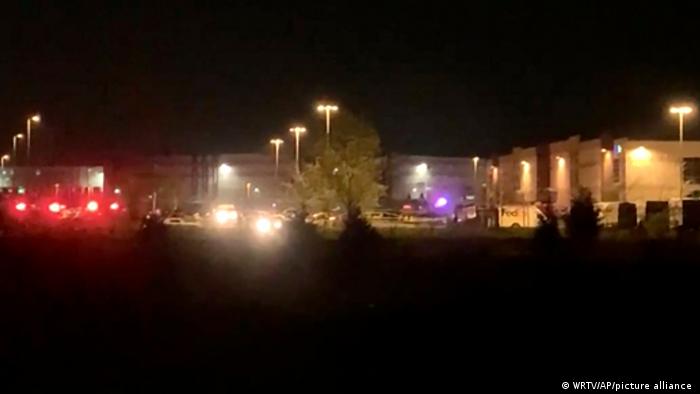 The FedEx facility is located close to the Indianapolis International airport

At least eight people were shot dead at a FedEx warehouse in Indianapolis late Thursday before the gunman took his own life, police confirmed.

Police spokesperson Genae Cook said on Friday multiple other people were injured, at least four were hospitalized and another two people were treated and released at the scene.

The shooter wasn't immediately identified and investigators were still gathering information, she added.

Cook said in an earlier briefing that authorities believed there was no longer an active threat to the community.

A man who said he works at the facility told local broadcaster WISH-TV he saw the shooting.

"I saw a man with a submachine gun of some sort, an automatic rifle, and he was firing in the open. I immediately ducked down and got scared," Jeremiah Miller said.

Indianapolis police: 'This is a sight that no one should ever have to see'

FedEx said in a statement early Friday that it was cooperating with authorities and working to get more information.

"We are aware of the tragic shooting at our FedEx Ground facility near the Indianapolis airport. Safety is our top priority, and our thoughts are with all those who are affected,'' the statement said.

Local media cited a company spokesman as saying that FedEx is now considering reevaluating a policy that prohibits employees from having their phones with them during shifts, making it difficult to contact them.

The FedEx facility reportedly has at least 4,000 employees.

Several mass shootings have been reported in recent weeks around the US.

In California, four people — including a child — were shot dead in an office building late last month. On March 22, 10 people were killed in a shooting at a grocery store in Boulder, Colorado.

Tens of thousands of people in the US die each year due to gun violence.

In her reaction to the Indianapolis shooting, US Vice President Kamala Harris said Friday there is "no question this violence must end."

For decades, US lawmakers have been split on the politically fraught issue.