US Missile Shield Plan Continues to Rankle | Europe| News and current affairs from around the continent | DW | 07.07.2008

Poland has sent its foreign minister to the United States in hopes of salvaging a missile defense deal. Russian President Dmitry Medvedev made it clear to George W. Bush that he is unhappy about the missile shield. 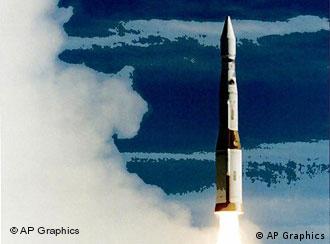 Poland wants more military support from the US

Polish Foreign Minister Radoslaw Sikorski was travelling to Washington on Monday, July 7 to try and elicit guarantees of US military protection for his country.

Poland has demanded billions of dollars in US investment to upgrade its air defenses, including Patriot ground-to-air missiles.

"I think we've got a signal from the American side that they are ready to negotiate," Paszkowski told TVN 24. 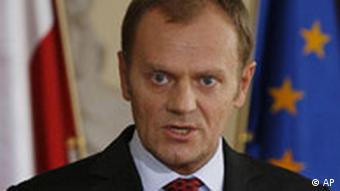 Prime Minister Tusk said no deal has been made

Washington has been concerned that Poland is getting cold feet on plans to station 10 missiles there to ward off potential attacks by "rogue" states such as Iran. The missiles are part of a defense shield that will also include a radar facility in neighboring Czech Republic.

Discussions on the missile shield have been dragging on since May 2007. The Czech government agreed to house the radar base three months ago, but it still has to be ratified by parliament.

"We haven't rejected anything. The proof is that talks are continuing. We want to continue this to a happy conclusion. It's about reinforcing our security. We need to consider our interests," Sikorski was quoted as saying by Poland's PAP news agency.

Polish Prime Minister Donald Tusk's government has been lobbying Washington to provide a THAAD, or Patriot-type air defense system in exchange for hosting the silos.

Tusk said a guarantee from Washington is all that is missing to move the deal forward.

"We can agree anytime, tomorrow, in a week, in a month, as long as we have real guarantees for our security," he said.

The US had earlier announced that a "tentative agreement" had been reached, but Poland's Defense Minister Bogdan Klich later said that there was no deal. 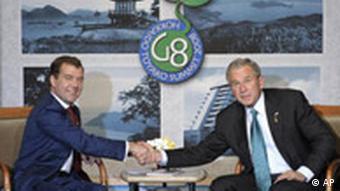 They have agreed to disagree on the issue

Russia has express displeasure with the idea of having a US missile shield next door. In recent months, the Kremlin has softened its rhetoric and has focused instead on getting security guarantees.

But Russia's new president, Medvedev, laid out his opposition to the idea in a meeting with US President George W. Bush. The two leaders held talks on the side of the Group of Eight (G8) meeting being held in Japan.

"There are certain questions on our agenda where we agree, and these are the matters pertaining to Iran, North Korea," Medvedev said. "But then certainly there are others with respect to European affairs and missile defense where we have differences."

Medvedev, who frequently referred to the US president as "George," said he would seek to intensify dialogue with the US during the remaining six months of the Bush administration. Bush signalled that he could do business with the new Russian president, whom he described as someone who could be trusted.

"While there's some areas of disagreement, there's also areas where I know we can work together for the common good," Bush said.

While leaders of the world's most powerful nations have set an ambitious agenda for the annual G8 meeting held in Japan, some say that it would be unlikely for the summit to end with a breakthrough. (07.07.2008)

The European Union and Russia said on Friday they had agreed on what areas should be covered by a wide-ranging partnership treaty without setting a deadline for it. (04.07.2008)