US flies suspected killer out of Afghanistan

Tensions remain high in Afghanistan after US forces flew a man suspected of killing 16 civilians out of the country. US Defense Secretary Leon Panetta was to meet with Afghan President Hamid Karzai on Thursday. 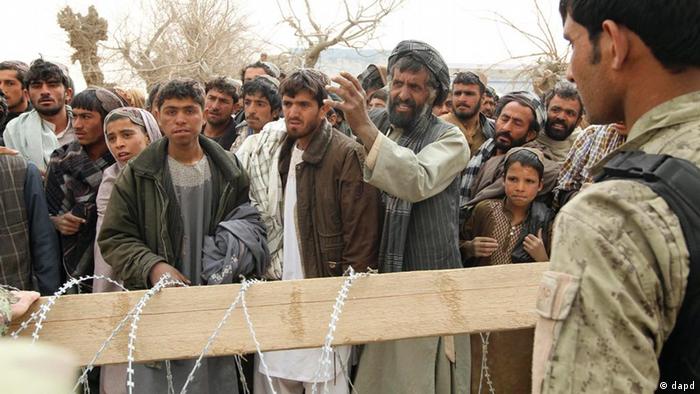 The US military has flown the soldier who stands accused of shooting dead 16 Afghan civilians over the weekend out of the country.

USmedia reported that the suspect had been flow to Kuwait late on Wednesday.

A Pentagon spokesman, Navy Captain John Kirby, told broadcaster Fox News that the US military didn't have appropriate facilities to hold a suspect "in this kind of case."

USbroadcaster CNN cited unnamed military sources who said the man had been taken to an American base in Kuwait.

Security concerns were seen as one of the main reasons for the move.

"His presence in the country would have put himself and other service members in jeopardy," American military defense lawyer Michael Waddington said. In 2010, Waddington represented a US soldier who came from the same base as the accused in a trial over the killings of three Afghan civilians.

Panetta tries to smooth things over

Visiting US Defense Secretary Leon Panetta was expected to try to reduce the current tensions in a meeting with Karzai on Thursday.

Meanwhile, US officials said a man who hijacked a vehicle and drove it onto a runway ramp as Panetta arrived at a coalition airfield in southern Afghanistan on Wednesday died of his injuries.

The Afghan interpreter had apparently tried to ram the vehicle into a group of US Marines at Camp Bastion in Helmand province before crashing. The man emerged from the wreckage engulfed in flames.

US General Mike Scaparotti told reporters that while this was a security breach, he didn't believe Panetta had been the target.

"I personally don't believe it had anything to do with the secretary's arrival," he said. There is "no way you can identify one aircraft from the other."

With tensions running high in the country, a few hundred protesters took to the streets of the southern city of Qalat on Thursday to demand that US forces leave the country. A spokesman for the regional police force in Zabul province said the 1,000 protesters were also demanding the suspect in Sunday's killing spree be tried in an Afghan court. Zabul borders on Kandahar province, where the killings occurred.