A strange phenomenon is occurring behind the scenes of Berlin's urban jungle. Berliners are trying their hand at planting blue potatoes, purple carrots or black beans, and finding out how satisfying gardening can be.

Some Berlin friends of mine recently got married and I had to rack my brain for a suitable gift. The days when silverware or crystal champagne glasses would do the trick are over - now you either have to chip in for the honeymoon or, if you're lucky, you're told that your presence at the wedding suffices.

In the end, a group of us decided on an organic box. It may sound rather prosaic - but what is more romantic than a candlelit dinner for two? Even better if it's made with fresh, seasonal, regional and, of course, organic ingredients. A year of vegetables should provide a great, healthy start to decades of happy marriage! 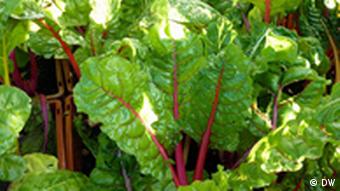 Swiss chard is a favorite among Berlin's gardeners

Since not a month goes by without a health scare related to e-coli, dioxin or salmonella, many in Berlin are opting for these boxes. They can eat the vegetables with a clear conscience because not only do they know where it was produced, they can also rest assured that those who toiled over the land to produce it were not paid a mere pittance.

I also decided to indulge in a box of my own. The first week, it came filled to the brim with carrots, beetroot, spring onions, tomatoes, lettuce and something I had never bought before - celery root.

I didn't have a clue how to cook it but thanks to my new Ottolenghi cookbook (google him immediately if you don't yet know him) I was able to whip up a delicious lentil concoction that would not have been out of place in one of Berlin's more sophisticated dining establishments.

Going back in time 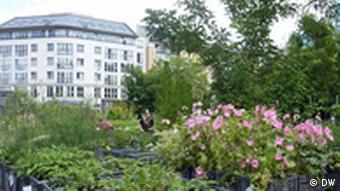 The Prinzessinnengarten is a mini-utopia amid a bleak urban landscape

Micha, a friend of mine who gets an organic box every week says it can be a bit challenging to cook with some of the less familiar produce. But far more challenging is the fact that his scheme (and there are dozens of different veggie box options) entails him spending three days a year in the fields.

His coop's philosophy is that anybody who buys a box should be able to identify with the agricultural process by getting their own hands dirty. "It's a bit like going back in time. It can be great fun but it's also extremely hard digging up potatoes or wading knee high in manure," Micha told me.

For Berliners with particularly green fingers, however, three days of gardening a year is not enough. Allotments are their passion. These are an institution here - after the war they were a necessity for hundreds of thousands of hungry Berliners. In pre-reunification days, they were sometimes the closest West Berliners got to the countryside and for the Easterners they were a good means of supplementing the meager supplies on offer in the state-run stores.

Now, there are an estimated 80,000 allotments dotted around the reunited city. Some acquaintances have rented one along the former border where they've planted a variety of vegetables. "It must be in my genes," Nick mused. "I just wanted to grow my own stuff and have the satisfaction of eating my own salad, picked straight away and eaten with the evening meal. It's so fresh." 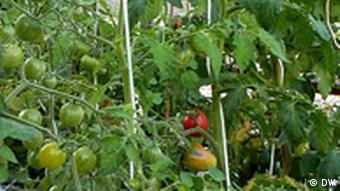 Getting tomatoes to ripen is not an easy task

But since Berlin is a city of experiments and community projects, some see allotments as being too individualistic. That's why the latest trend is urban agriculture. One of the most successful examples is the Prinzessinnengarten (literally, princesses' garden) bang in the middle of the multicultural Kreuzberg district.

I popped in on a hot sunny afternoon and was given a tour by one of the founders. He said quite matter-of-factly that the project was nothing spectacular: "We just wanted to plant carrots, tomatoes and potatoes in the city center and show Berliners how much potential there was here."

They rented a site that had been a wasteland for over 50 years and got to work creating a "mini-utopia where people can work, relax, communicate and enjoy great-tasting, locally-produced food." With the help of friends and locals, they made compost beds and planted a whole series of rare and old plant varieties.

The "unspectacular" project was so successful that they now set up smaller gardens all over Berlin - on housing estates, in schools or universities, and even at the Berlin International Film Festival so that everyone can get a feel for the amount of effort that goes into producing food.

Vegetables on the runway 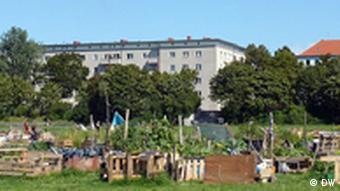 The Tempelhof gardens bring the local community together

At another typically Berlin project, I met some guys who were willing to put in the hours so as to give something back to their Kiez, or local neighborhood. On the grounds of the former Tempelhof airport, which has become a huge park for cyclists, skaters, kite-flyers and now gardeners, they rent out a plot where they grow their own fruit and vegetables.

The guys told me they wanted their children to be able to trace the journey of a tomato back to its seedling status, and to be aware of the work involved. On their plot, they have planted fennel, Swiss chard and eight different varieties of bean, so now their children know that black, red, white, green, blue and even purple beans exist!

I was tempted to get my hands dirty myself just so I too could experience the much praised satisfaction but each time I got down on my knees to garden (all these projects are grateful for volunteers), torrential rain poured down on me and I took cover in the nearest cafe! Maybe the fact that I can't even keep a basil plant alive for more than a week is another sign that gardening's not for me.

Lucky, then, that a box of fresh produce now arrives on my doorstep every week, and that I can look forward to dinner invitations from my newly-wedded friends.

Throwing open its doors to travelers in 2006, Berlin's central station - Hauptbahnhof - is the largest two-level crossing station in Europe and has risen from mere travel terminus to an emblem of unified Germany. (26.08.2011)

Germany might be known for beer and bratwursts, but Berlin is starting a new culinary trend. With "Vöners" and Sun Day Vegan burgers, it's becoming an oasis in the meat-loving desert of Deutschland. (19.08.2011)