The mountain range just south of Bonn was born from the fiery belly of the earth millions of years ago. The wild untamed nature of the Eifel remains in the form of an accessible but thrilling modern wilderness. 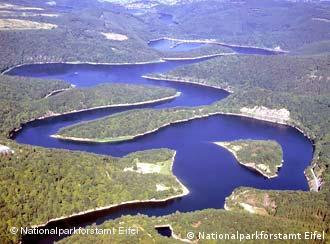 Spectacular waterfalls thunder down into the valleys, wreathing the forests in shrouding mists. In winter, the cliffs can transform themselves into ice palaces shimmering with a million lights. In spring, the river meadows are a sea of flowers. Stretches of heath with magnificent juniper stands remind visitors in summer that until 200 years ago, when reafforestation with conifers first began, the Eifel presented a very different appearance.

Everywhere, there is evidence of the region's fascinating geological past. The cones of huge volcanoes rear up out of the gently undulating Eifel plateau. Poisonous gases swirl up from subterranean sources, a fatal hazard for many animals.

Any number of abandoned lava quarries have been turned by human hand into gardens of Eden. An incredibly rich variety of insects swarm around the blossoms of extremely rare plants. Toads, snakes and lizards hunt here, as do bats and the rare red kite. Gently flowing rivers are rendezvous for racoons, kingfishers and dippers. 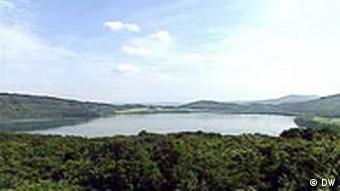 And then the "eyes of the Eifel", the crater lakes. Enigmatic and mysterious at dusk or in the morning mist, they radiate a majestic calm. Nowhere in the world are there so many volcanic lakes in such a limited area. All kinds of legends have grown up around these still waters, whose secret depths many scientists have attempted to negotiate and discover.

Two historic cities and the Rhine valley in Germany have been added to UNESCO’s World Cultural Heritage list. Business owners near the chosen sites are hoping for a new influx of tourists. (May 26, 2003)

While Berlin was cut off from the rest of West Germany during the Cold War, Bonn was the German capital. As a result of its standing, and rich history, Bonn is a city brimming with culture. (Aug. 9, 2005)

Looking to experience the charm and variety of Germany without working too hard at it? You may want to consider a river cruise. Just sit back, relax, and watch thousands of years of history glide by. (June 5, 2003)