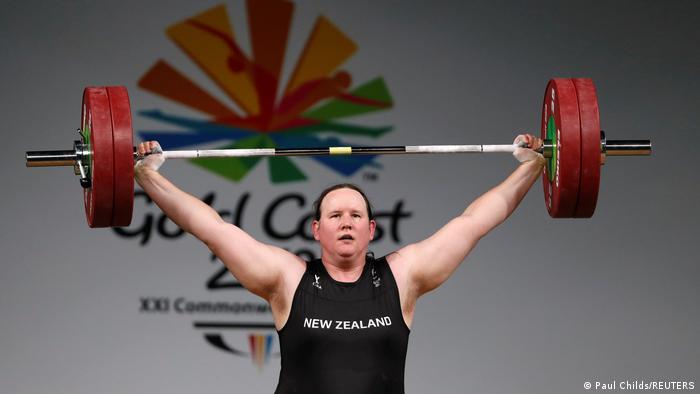 The decision by New Zealand's Olympic Committee on Monday to name Laurel Hubbard to the country's women's weightlifting team for Tokyo 2020 was just as controversial as it was historic, Hubbard is set to become the first ever transgender athlete to compete at Olympic Games.

Fabienne Peter also made history when in 2018 she officially became the first trans woman in Swiss ice hockey. Currently playing on EHC Basel's women's team, for Peter the Hubbard news had a special meaning.

"I heard the announcement live on the radio. My first reaction was 'oh this is cool' and then I realized 'no, this is amazing!'" Peter told DW.

She knows the pain Hubbard must have gone through. Peter started playing ice and inline hockey as a teenager. She quickly realized she was sitting in the wrong dressing room, with the wrong teammates.

"It was just a feeling," she said, "something wasn't right for me."

In her early 20s, she joined the volunteer fire department and got together with her girlfriend.

"Inside me, the discrepancy stayed. So, I went full throttle in sports, ice hockey, to distract myself."

Sometime in her late twenties, Peter decided to "tackle it," as she put it. She embarked upon hormone therapy.

With the support of her previous club’s head coach, she approached the Swiss Ice Hockey Federation to ask for a change to be made to the regulations. The federation quickly complied with the request and followed the regulations adopted by the International Olympic Committee (IOC) in 2015.

Those require athletes to have a total testosterone level in serum below 10 nanomoles per liter for at least 12 months prior to their first competition.

From then on, she no longer had to sit in "the wrong dressing room, with the wrong teammates."

But just like Hubbard, she had to address one argument again and again.

"When trans women engage in sports, it is often seen as unfair. Critics will always say it's about the gender they're born with." she said. "But that really is difficult because it negates everything that one has gone through. The training, the therapy and the trauma."

And science still hasn't found a clear answer to the matter.

The International Federation of Sports Medicine, a federation of national sports medicine associations based in Lausanne, recently emphasized the "distinct lack" of data. Which is why the question as to whether transgender female athletes have an advantage over other women athletes or not, simply can’t be conclusively determined.

However, some studies suggest that strength advantages compared to other women persist even after three years of hormone therapy. Others find that trans women have an athletic advantage one year after starting hormone therapy; however, their performance becomes more equal after two years.

Either way, the medication has a hard-hitting effect, as Peter describes it.  She said she experienced a "second puberty" at the age of 30.

"I can no longer lift the weights that I lifted as a man. I was shocked how big the difference is. Without testosterone, I'm much weaker," she explained. "By all measures, I'm not stronger or faster than my female peers." 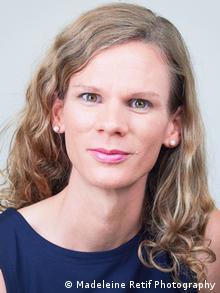 Fabienne Peter made history when she in 2018 officially became the first transwoman in Swiss ice hockey.

"That should be enough," Dr. Birgit Braumueller from the German Sport University Cologne, told DW. "When you go through the treatment, you follow all the rules and you meet the IOC-threshold, the debate should be settled."

So why do transgender athletes still struggle for acceptance?

Braumueller researched gender identities and found that especially in sports, transgender people are often discriminated against. In the Europe-wide Outsport study, 95% of respondents from the LGBTQ said that sports had a problem with transphobia. Even worse, 40% of trans athletes active in sports in the 12 months prior to the study, experienced verbal abuse, discrimination, threats or physical violence.

According to Braumueller, the question of fairness doesn't really apply, as "total equality in sports is illusory anyways. There’s always someone who somehow has a physical advantage, like a Usain Bolt or Michael Phelps. So why is it such a problem with trans athletes?”

While science needs to further its research, the obvious findings for transphobia are there. Fabienne Peter knows all about them, although it hasn't been much of a problem for her personally.

"While I had a good experience and feel very much integrated, many others might be tolerated, but never really accepted," she said.

In Peter's view, Laura Hubbard will go down in history whether she comes home from Tokyo ith a medal or not. Her participation alone "leads to a lot of positive things. It is, of course, a clear sign of empowerment and it is likely to release fears in many trans people."

The problem, she said, is less with trans athletes, and more with a system that is still stuck in heteronormative structures and thus excludes certain groups of people.

"But sports is for everybody," Peter stressed.

For now, the IOC is sticking with its current regulations. Originally, the guidelines were to be tightened before the Tokyo Olympics, but by the end of 2019, the convened panel of scientists failed to find consensus.

Scientists had been expected to recommend cutting the allowed levels of testosterone for trans women competing in elite sports by half to "to protect inclusivity, safety and fairness in sport."

But, because of scientific disagreement, political clashes and out of sensitivity to the impact new rules would have had on the Olympics, they postponed their decision.

Without the proper framework IOC's medical and scientific director, Richard Budgett, called a rushed decision "neither ethically nor legally admissible,"

The IOC will still have to find one, even more so after Hubbard takes the Olympic stage.

"But hopefully they work something out with trans athletes and not without them," Peter said.

In case Hubbard does win a medal in Tokyo, Peters has some advice for her: "You’ll have won it fair and square. You’ll have followed all the rules and most importantly you’ll have worked very hard for it. So go out and enjoy it!"

FINA has largely banned trans women from female categories. But such policy is based on a flawed premise and risks marginalizing them, argues researcher and guest writer Blair Hamilton.