UN: Gambia's Jammeh must step down by mid January

Despite him refusing to admit electoral defeat, the UN has told Gambian leader Yahya Jammeh to step down next month. Jammeh lost the December 1 election to opposition leader Adama Barrow. 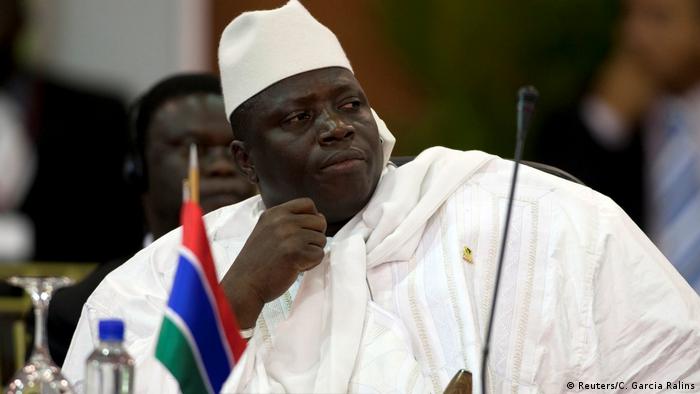 Jammeh would be "strongly sanctioned" if he sought to remain in power after his mandate ends on January 19, the United Nations envoy for West Africa said Wednesday.

"For Mr. Jammeh, the end is here and under no circumstances can he continue to be president," the world body's Mohammed Ibn Chambas said.

He spoke a day after Jammeh's party, the Alliance for Patriotic Reconciliation and Construction (APRC) lodged a legal case to challenge the result of the December 1 election.

APRC called on the country's Supreme Court to annul the vote, even though the court is not operational at present because Jammeh fired two of its three judges earlier this year.

Security forces have taken control of the electoral commission in The Gambia, where a visiting delegation of African heads of state wants to persuade President Jammeh to relinquish power. (13.12.2016)

Gambian President-elect Adama Barrow has called on his predecessor, Yahya Jammeh, to accept defeat in the December 1 election. Appealing for calm, he said Jammeh had no constitutional right to reject the results. (10.12.2016)

The petition demanded a new election take place with a revalidated voter registry.

Jammeh initially acknowledged defeat after 22 years in power, even calling the election fair and conceding to President-elect Adama Barrow in a telephone call broadcast on state television.

But last week the 51-year-old announced he was rejecting the results.

The country's Electoral Commission insists the vote was transparent, fair and accurate, clearly showing that Barrow had won.

On Wednesday, an African Union (AU) delegation met with Jammeh, hoping to persuade him to step down.

Dozens of professional bodies, unions, and civil society organizations have also added their voice to the calls for Jammeh to respect the result.

For the past two days, security forces have blocked the entrance to the Electoral Commission in Banjul, ignoring calls from UN Secretary-General Ban Ki-moon to "immediately vacate" the premises.

Ban called the takeover of the building an "outrageous act of disrespect of the will of the Gambian people."

Jammeh's chief of the defense staff has vowed to remain loyal to the country's longtime leader, indicating that Gambia's military would help the autocrat stay in power.

Soldiers remained in the streets of the capital, Banjul, on Wednesday as residents worried about possible unrest, a stark contrast to days of celebration in the streets after Jammeh's loss.

Many shops remained closed, while residents stayed indoors and children did not attend school due to the heavy military presence.