A final round of UN-backed negotiations on the future status of Kosovo -- the Serbian province whose ethnic Albanian majority is craving independence -- will be postponed by one week and start on Feb. 21. 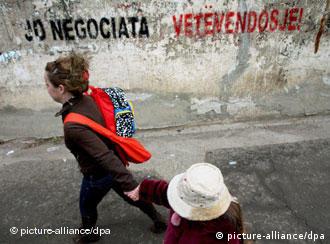 "We will start the negotiations on the 21st of this month," UN deputy envoy in the talks Albert Rohan told journalists in the Kosovo capital Pristina on Friday.

Serbian President Boris Tadic on Thursday asked the United Nations office dealing with Kosovo's status, UNOSEK, to postpone the talks originally planned for Feb. 13 so that Belgrade could have time to form a new parliament and Kosovo negotiating team following elections last month. 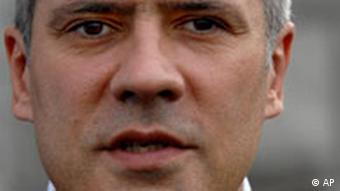 Serbian President Boris Tadic asked for a delay in talks

Asked if the new date was final, Rohan, the deputy to the special UN envoy to the Kosovo talks, Martti Ahtisaari, said, "It is the word of the president (Tadic), and we have no reason to doubt that."

"We will finish them (the talks) as planned before the end of March," Rohan added after meeting with Kosovo's ethnic Albanian president Fatmir Sejdiu.

Sejdiu, for his part, said that Pristina accepted UNOSEK's decision even though it had reservations about any further delays to resolving Kosovo's status.

"We said that the delay won't have positive effects and this delay is a sign of understanding from UNOSEK," Sejdiu told reporters. "We insist on fast dynamics. Delaying the process will not help." 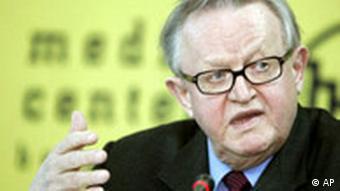 Martti Ahtisaari originally planned the final round of talks to start on Feb. 13

UN mediator Ahtisaari said Thursday that he expects the final status of the Albanian-majority Serbian province to be settled well before the German presidency of the European Union ends in late June.

Asked if he expected the contentious issue to be settled by the end of June, when the six-month German presidency is due to end, Ahtisaari said, "I hope it is solved much earlier than that."

He stressed that once he finalizes his package and turns it over to the UN Security Council by the end of March, "it is out my hand. ... I expect them (the council members) to do their job."

Last week, Ahtisaari unveiled a settlement plan offering self-governance to the disputed province. Although it does not specifically mention independence, the plan is opposed by Serbian leaders. 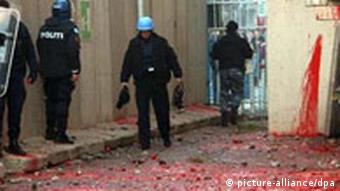 "I am prepared to consider constructive amendments and I am willing to integrate compromise solutions that parties might reach," he said. "I want to give both parties the chance once again to make their points. I will then finalize my settlement proposal for submission to the Security Council."

Asked whether his plan amounted to independence in all but name for Kosovo, Ahtisaari replied that "both parties have drawn the conclusion on the basis of this package that ... independence (for Kosovo) will be supervised by the international community."

Though formally still part of Serbia, Kosovo has been run by a UN mission since 1999, after a NATO bombing campaign drove out Serbian forces over a crackdown against ethnic Albanian civilians.

A NATO-led force has overseen peace in the province ever since.

A high-level EU delegation encouraged Serbian politicians to form a pro-European government coalition and urged them to be "constructive" in the run-up to the final decision on the future of Kosovo. (08.02.2007)

The UN envoy for Kosovo has refused to delay talks on his plan for the troubled region, despite Serbian requests to wait until a new government has been formed. The UN fears a delay could lead to violent confrontation. (06.02.2007)

Opinion: Kosovo is a Challenge for the EU

UN envoy Martti Ahtisaari presented his draft proposal for Kosovo on Friday. His difficult and uncertain mission is of paramount importance, not only for the Balkans, but the EU in general, says DW's Verica Spasovska. (02.02.2007)