A report by a three member inquiry panel set up by the UN Human Rights Council paints a disturbing picture of Eritrea. Panel member Sheila Keetharuth told DW of rights violations and a 'climate of fear.' 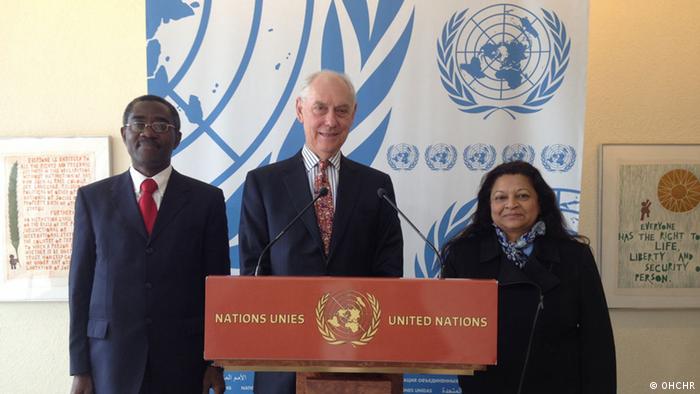 DW: What can you tell us about the rights violations in Eritrea you uncovered during the your investigations?

Sheila Keetharuth: There are systematic, gross human rights violations which are being committed in Eritrea under the authority of the government. Some of these violations constitute crimes against humanity. Our investigations have identified specific patterns of systematic human rights violations. The type of violations and the systemic nature of the violations - meaning that they cannot be the result of random or isolated acts - lead us to say that we have seldom seen human rights abuses on such a scope or scale.

The government may question your findings because you were not able to carry out your research inside the country. How sure can you be that your findings will stand up to scrutiny?

We would have liked to have been able to go to Eritrea and conduct the investigations inside the country, but the government didn't respond to our request for information and we were not invited to the country. However, the kind of evidence we have collected from different people, different places, is such that it would be difficult to say that there had been some sort of collusion forcing us to get the sort of evidence that we were able to collect. The way the information came to us and was analyzed was done systematically. We took every precaution necessary to ensure that what we found was indeed the kind of violations that people have suffered over a period of time - since the country became independent to the present day. People from all over the world have been in touch with the Commission of Inquiry; either by sending submissions or they are people we have met in person. All precautions were taken to ensure that the testimonies collected reflected the real situation in terms of human rights violations they were subjected to.

Your report also refers to an extensive spying and surveillance system. How does the government spy on its citizens?

Neighbors spy on other people. There is also the systematic recruitment of spies. Even members of the same family find themselves asking who can you trust? People are afraid that information on them which is collected through a network of spies could be used against them - that they could be incarcerated arbitrarily or used in different ways. So it instills a climate of fear.

5,000 Eritreans flee the country every month. Is it the mistrust that is forcing people to leave?

It is the scale and the scope of human rights violations in the country which causes people to leave. I would say there is a direct link between the two.

You refer to acts of arbitrary detention, torture. What else can you tell us about the scope of these abuses?

Let me give you one example with regard to arbitrary detention. Most, if not all, of the people we have spoken to have spent some time in incarceration. And if they haven't experienced it themselves, then they know of family members, or family members of people in the neighborhood who have been incarcerated.

President Isaias Afwerki has ruled Eritrea since the 1990s. What course of action would you recommend?

There are a number of recommendations we would make. The government should start looking at how to establish an independent and impartial mechanism to launch investigations and where appropriate bring perpetrators to justice. Victims should also receive adequate redress. We would also call on the government to ensure that there is separation of powers between the legislature, the executive and the judiciary. We also urge the government to allow the creation of political parties and to hold free, fair and transparent elections. It is important that there is an independent and transparent judiciary. Enforced disappearances and all forms of extrajudicial executions must be stopped immediately. I would like to stress that the issue of national service [conscription] is very important. It needs to be limited to the eighteen months which is statutorily prescribed. The indeterminate length of national service is a root cause of widespread abuses.

Mauritian human rights defender Shiela Keetharuth is the UN Special Rapporteur on Eritrea and served as a member of the Commission of Inquiry set up by the UN Human Rights Council to investigate abuses in that country.