Ukraine has nationalized its biggest bank in order to avoid a financial meltdown. PrivatBank had been plagued by rumors that it was heavily burdened by serious debts. 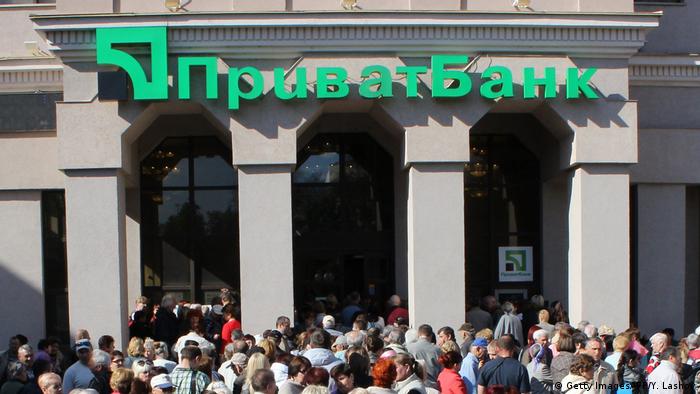 Ukraine has nationalized its largest bank, PrivatBank, to prevent a potential financial meltdown in the eastern European country.

Germany's justice system is often powerless in the global fight against money laundering. The case against a close associate of former Ukrainian President Viktor Yanukovych has made that abundantly clear. (24.04.2016)

Economy Minister Aivaras Abromavicius has accused parts of the Ukrainian leadership of blocking systemic reforms in the country. "My team and I have no wish to be a cover for open corruption," he said after resigning. (03.02.2016)

The Ukrainian government said in a statement Sunday it was now the "100 percent owner of PrivatBank and guarantees the uninterrupted functioning of this institution and the safety of its clients' money."

Local media reports say the bank gave loans to insiders that might never be repaid. PrivatBank's bonds have fallen by almost 50 percent since the reports surfaced in November. The bank controls one third of Ukraine's deposits and also has branches in Baltic countries.

Former owner Igor Kolomoyskiy is a billionaire who was an early target of Ukrainian President Petro Poroshenko's fight against corruption. Dragon Capital economist Sergiy Fursa said "80 to 90 percent of PrivatBank's loans were to institutions" controlled by Kolomoyskiy.

"This was insider lending - in other words, money was withdrawn by its owners from the bank," said Fursa.

Closure would lead to 'panic'

Oleksandr Savchenko, head of Kyiv's International Institute of Business, told the "Kyiv Post" that the country's banking system would not survive if PrivatBank were to close.

"Other banks would not be getting their loans back from PrivatBank, a series of bankruptcies would begin, and there would be panic," Savchenko told the English-language weekly.

The bank said the nationalization was a consequence of "media attacks" by political insiders who opposed Kolomoyskiy. The bank's director of IT wrote on his personal Facebook page that "the decision to voluntarily and peacefully hand over the bank to the government was taken at the very moment that we understood that these media attacks - which we could survive - could endanger our clients." He also called the decision "unexpected news."

"The bank will continue working, just as it did before," said Gorokhovskiy.