Ukraine is becoming ′a totalitarian state′ | World | Breaking news and perspectives from around the globe | DW | 17.01.2014

Ukraine is becoming 'a totalitarian state'

To hold on to power, the leadership in Kyiv is significantly curtailing civil liberties. Oleksandr Sushko, the Ukrainian coordinator for EU cooperation on civic rights, told DW he is outraged at the new laws. 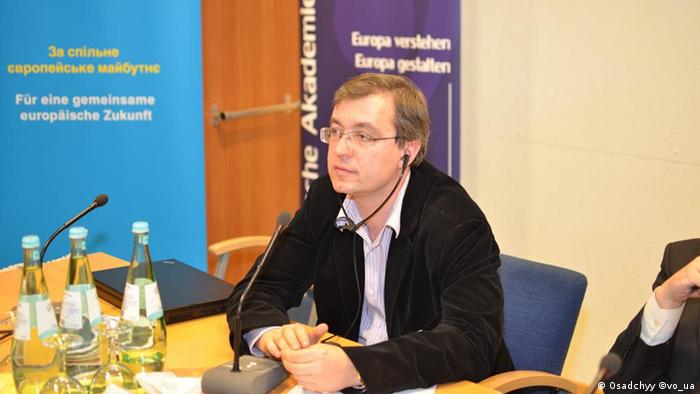 The extensive legislative package the Ukrainian Parliament passed on Thursday (16.01.2014) came as a complete surprise. The laws were waved through without any consultation with advisory boards and after just a single parliamentary reading. The government majority carried out the vote by a show of hands in the parliament and all protest from the opposition was in vain.

The new law is supposed to make it punishable to spread "defamations" - especially online: The legislation could silence journalists and bloggers if they criticize state officials or politicians. The right to peaceful protests will also be curbed. There might also soon be a Ukrainian equivalent to the recent controversial Russian law which labels non-governmental organizations as "foreign agents" if they receive funding for their projects from outside the country. The legislative package will come into law as soon as the president has signed it.

Oleksandr Sushko, who heads the Kiyv institute for Euro-Atlantic Cooperation, is the coordinator for the Ukrainian platform for civil society within the framework of the EU Eastern Partnership. The platform is an umbrella organization for dozens of Ukrainian NGOs which are all EU partners for democratic transformation in Ukraine.

DW: All the Ukrainian NGOs that work together in the Eastern Partnership with the EU could soon be labeled "foreign agents." The EU supports civil society in the Ukraine and would like to provide more funds for projects. Is the Ukrainian government rejecting the EU as a strategic partner?

Oleksandr Sushko: The government is being led in its actions by one single consideration: how it can create a social and political environment in which it can retain power in the long term. It is not interested in what the European Union thinks of it. You can see that as you choose: as "brazenness" or as whatever you'd like. But that isn't important. As the EU cannot help the government in reaching its own goal - staying in power for a long time -, the opinion of the EU is irrelevant.

What support would you expect from the EU in this situation?

It's important that the EU reacts immediately and on the highest level. For example they (the government - the ed.) want to ban more than five cars driving together as a motorcade as an act of protest. They want to label NGOs "foreign agents." This legislative package will radically change the legal framework in Ukraine: all the important laws that have so far guaranteed the country a certain amount of democracy and a bit of pluralism. The changes also concern the free exchange of information on the Internet. This is a method that allows you to legally close any website. And it also applies to information on social networks that the government disapproves of. All these things will be illegal soon. Any social activity which could harm the government will now be against the law and will be criminalized.

Is Ukraine becoming a police state?

The legal framework for such a state has now been put in place. And more than that: this is the legal framework for a totalitarian state. Because according to this law, anything can soon be seen as a "defamation." Any criticism of abuses of power on the part of officials, any call for social change could be labeled as "extremism." That also includes any calls to replace the government by legal means. And any publication on the Internet, as well as the regular dissemination of information will be equated with the work of news agencies and will require a permit. These laws could block access to blogs and to all sorts of other things.

How can this repressive law be stopped?

Initially you have to demand for this unacceptable, illegal bill not to be presented to the president for signature. It was passed unlawfully, because the proceedings weren't correct. If it is still presented to the president, you'd have to demand that he doesn't sign it. And if he signs it, it will change the face of the country. The public has to react to this law.

The opposition journalist Tetyana Chornovol suspects that Ukrainian President Viktor Yanukovych ordered the brutal assault on her. The activist also claims to have more damaging material on the president. (10.01.2014)

Green lawmaker Rebecca Harms has supported the pro-Europe protesters in Ukraine from the start. She tells DW that she senses a real desire for democratic change and closer ties with Europe. (19.12.2013)