The escalating crisis in Ukraine has served as something of a stress test for transatlantic unity. It was evident again on the last day of the Munich Security Conference that there are big divisions among Western powers. 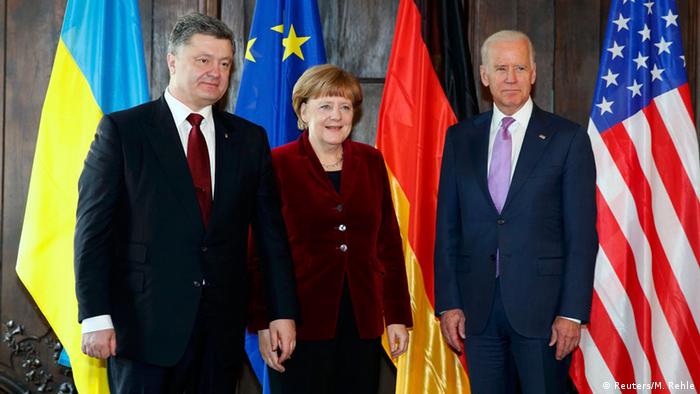 Watching the joint appearance of the top diplomats from Germany, the US and France in Munich, the message they were trying to send was very clear. Washington is on the same page as Berlin and Paris as far as the approach to deal with the Ukraine crisis is concerned.

German Foreign Minister Frank-Walter Steinmeier and France's Lauent Fabius explained again the rationale behind their last-minute effort to find a negotiated solution to the Ukraine conflict and their opposition towards supplying arms. As Steinmeier put it: "Providing weapons is not only risky, but also counter-productive."

But it was US Secretary John Kerry who vehemently and repeatedly denied a rift between the US and Europe on whether or not to supply lethal weapons to Ukraine.

"Let me assure everybody, there is no division, there is no split," he said. In his remarks Kerry tried to steer clear of the key issue that dominated the gathering of global leaders in Munich: Is the Obama administration moving to supply arms to Ukraine?

After all it was Kerry himself who just a couple days earlier had stated that President Barack Obama was "soon" to decide whether to supply arms to Kyiv. But in Munich he played down the issue saying only that "discussions" on sending arms to Kyiv were "tactical, not strategic."

Discord in corridors of power

This view, however, was belied not only by the fact that this issue and its potential consequences had arguably triggered the Merkel-Hollande mission. It was also not shared by the new head of the US Senate's Armed Services Committee John McCain.

Minutes after Kerry had spoken, McCain in his remarks made clear that he did not consider sending arms a purely tactical issue. He reiterated that the West needed to provide Kyiv with weapons to defend itself and that he considered Putin an aggressor whose appetite would not stop with Ukraine. To be sure, McCain couched his tough stance in much friendlier words than two days earlier when he lashed out against the German government, accusing it of foolishness.

Still, there it was plain to see for everyone. A leading protagonist of the US government taking the opposite view of the foreign ministers of Germany and France, and possibly the US President – this is not what transatlantic unity looks like.

"There are very very deep tensions," Kristian Harpviken, director of the Peace Research Institute Oslo (PRIO) told DW. "These tensions have been with us for the last couple of years, but the question is with the US moving to outright military support would that deepen the tensions or not."

Whether the existing transatlantic tensions can be managed and contained or whether they will break out into open disagreement about the course of action vis-à-vis Russia and Ukraine will depend on two things. One, the progress and outcome of the Merkel-Hollande mission. And two, Obama's decision on arms shipments. Both issues are linked.

"Obama is under incredible pressure to supply arms to Ukraine," Fiona Hill, director of the Center on the United States and Europe at the Brookings Institution told DW. "So far he has not caved in." But how long he can - and whether he wants to hold out – remains unclear. 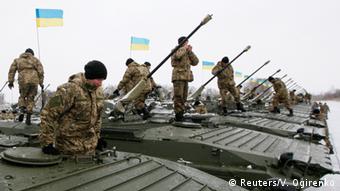 "This is an extremely dangerous situation," said Hill. Many in Washington, she noted, want instant action and do not really understand Merkel's position. What was missing was a greater strategy beyond calls for sending arms to Ukraine.

The divide between American proponents of supplying Ukraine with arms and Europeans who oppose such a move essentially boils down to this: Are the transatlantic partners ready for a high-risk wager that delivering weapons undoubtedly is? Europeans aren't. US Republicans clearly are. The Obama administration - nothing unusual - is still holding out.

“If the US did decide to intervene in Ukraine would it make things better or worse”, Sunjoy Joshi, director of Delhi-based Observer Research Foundation (ORF) told DW. “That is a big question.”

Perhaps already tomorrow it will become clearer on which side of the high-risk wager that is delivering weapons to Ukraine the Obama administration will finally come out on. That's when he will meet with Chancellor Merkel in the White House to discuss the Ukraine crisis. It's not just for the Ukraine that there is a lot at stake. The same applies to the transatlantic partnership.

The leaders of Germany, France, Russia and Ukraine are hoping to meet this week to discuss the crisis in eastern Ukraine. This follows a last-ditch German-French push to end the bloodshed. (08.02.2015)

Ukraine's president has said his country is ready for an immediate and unconditional ceasefire in eastern Ukraine. A rising death toll is adding to pressure on a Franco-German effort to end the 10-month conflict. (07.02.2015)

Zannier: 'New weapons seem to appear all the time'

The OSCE's Secretary General Lamberto Zannier told DW he's worried about arms in eastern Ukraine. He also emphasized his organization's role in any attempt to implement a ceasefire in the troubled region. (08.02.2015)