Eleven people have been killed in an assault on a police station in northwestern China. The attack is the latest in a series pointing to growing unrest in the region of Xinjiang. 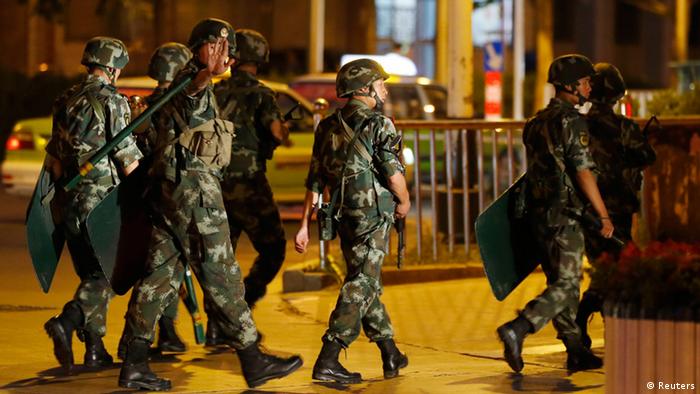 According to the Xinjiang regional government, two officers died and police killed nine of the assailants, who used knives and axes in Saturday's attack in Bachu county's Serikbuya township, near the historic city of Kashgar.

State media reported that the attackers also injured two police officers. The US government-funded broadcaster Radio Free Asia reported that a police special weapons and tactics team killed several of the young attackers despite appeals from residents who had gathered at the scene to take them alive.

"There were around 40 to 50 people gathered around the station," the broadcaster quoted an eyewitness as saying, though it did not identify the person because of the sensitivity of the matter. "They shouted to the police not to shoot, capture them alive and try them."

The government statement on Saturday's attack gave fewer details, but the official China Daily newspaper reported that police shot the nine attackers dead on the spot, and identified one of them by the Uighur name of Abula Ahat. The newspaper reported that the assailants had targeted a police station already attacked once this year, in April. That attack resulted in a group hacking and burning to death 15 members of the security services, with police shooting dead six of the assailants.

Many Uighurs have long resented Chinese rule, and insurgency has occasionally flared up in Xinjiang province. This year, for example, has provem particularly bloody, with a number of deadly clashes in Xinjiang and one in the heart of Beijing in which three attackers drove a vehicle through crowds in front of historic Tiananmen Gate, killing themselves and two tourists. Overall, the attacks have led to the deaths of scores of attackers and government officials, with an accurate total figure hard to pin down because many incidents go unreported.

Power games in the shadow of disaster

The whole world is rallying round to help the Philippines after the devastation caused by Typhoon Haiyan. Only China is hesitant - Bejing's reserve has a political history. (14.11.2013)

More than 8 million Uighurs - a generally Islamic group of Turkic descent - live in Xinjiang, a sprawling region of about 21 million people that borders Afghanistan, Pakistan and a number of Central Asian states. Many Uighurs complain that policies that favor ethnic Chinese have marginalized them as the indigenous population.

The authorities blame violence in the region on alliances formed by some Uighurs with al Qaeda. However, activists say despair over economic and social discrimination and cultural and religious restrictions have fueled the anger among Uighurs.

"I again call on international society to take emergency measures to stop the Chinese government from directly opening fire to suppress Uighur protesters and depriving them of using legal appeals and defending their rights," said Dilxat Raxit, a spokesman for the World Uighur Congress, an advocacy group based in Munich.