Demonstrators have clashed with police outside of a Turkish courthouse after it declined to order the arrest of a policeman accused of killing an anti-government protester. The accused claims he acted in self-defense. 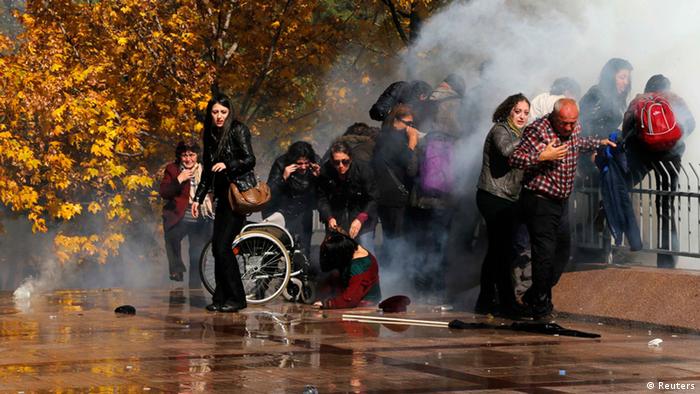 Police used water cannon and tear gas to disperse hundreds of protesters who had gathered outside of the court in Ankara, which is hearing the case of the police officer accused of killing 26-year-old Ethem Sarisuluk.

Eyewitness accounts said police moved in when the crowd began shouting anti-government slogans after the court rejected a request by the victim's lawyers for the accused to be detained.

What started as a peaceful protest against plans to develop an Istanbul park expanded to a rebuke of Turkish Prime Minister Recep Tayyip Erdogan's policies. As unrest continues, DW reviews how the demonstrations started. (30.07.2013)

Instead, the court ruled that due to security concerns, the police officer in question would be allowed to give his testimony via video conference. The accused was not in court for Monday's hearing, but had appeared in the dock back in September wearing a wig and a fake moustache in an effort to conceal his identity. The court was adjourned until December 2.

If found guilty of the charge of "exceeding legitimate self-defense," the accused could face up to five years in jail.

Sarisuluk was fatally shot in an anti-government protest back in June. This was among a wave of demonstrations that swept through many Turkish cities last summer, after a police crackdown on protesters trying to prevent the planned redevelopment of an Istanbul park. Sarisuluk was one of six people to die in the unrest.

Prime Minister Recep Tayyip Erdogan's Islamic-rooted government faced widespread international criticism for its handling of the crisis, with many of Turkey's Western allies condemning what critics say was an excessive use of police force.

Earlier this month, Amnesty International accused the Turkish authorities of committing widespread rights abuses as they sought to quell the unrest. Turkish officials have said any alleged abuses would be investigated.