Turkey's appeals court has upheld convictions of more than 200 military officers for plotting to topple the Turkish government. The ruling is seen as a sign of what other opponents of Prime Minister Erdogan can expect. 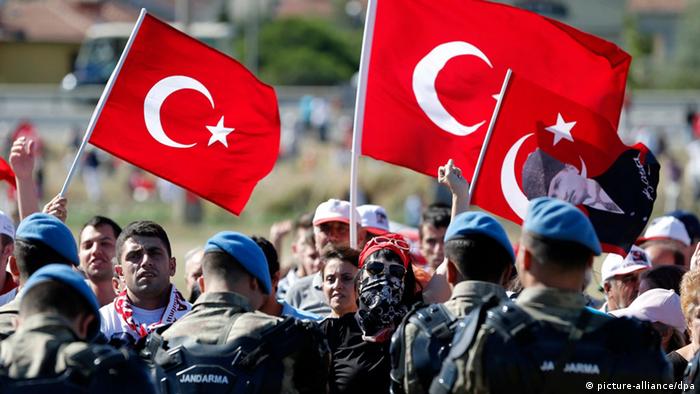 Some 100 senior Turkish army officers are on trial for their alleged role in a 1997 coup. Critics call it revenge by the Islamic government against the secular army. Others say it is Turkish democracy at work. (03.09.2013)

More than 300 suspects were convicted in September 2012 for having conspired to topple Prime Minister Recep Tayyip Erdogan and his Justice and Development Party (AK) in 2003 in order to restructure Turkey on a nationalist footing.

Defendants in the high-profile case included army officers, lawyers, academics and journalists who faced dozens of charges with prosecutors claiming the alleged network had carried out extra-judicial killings and bombings in order to trigger a military coup.

The court on Wednesday also reversed the judgments against at least 63 other defendants and ordered their release from prison.

Wednesday's ruling was highly anticipated by other military figures, such as those found guilty earlier this year of having been part of the separate "Ergenekon" conspiracy.

Turkey's military has long played a major role in politics, having staged three coups between 1960 and 1980. It came to be seen as the guardian of the country's secular political system, founded by Mustafa Kemal Ataturk, and pressured the country's first Islamic-led government out of office in 1997.

Since first coming to power in 2002, Prime Minister Erdogan's Islamist-rooted AK party has reined in army influence with a series of reforms designed to boost democracy.

The high-profile anti-conspiracy trials have exposed deep divisions in Turkish society and are seen as a key test in the decade-long conflict between Erdogan and Turkey's secularist establishment.

Critics, including the main opposition party, have said the charges against the alleged plotters are trumped up and are aimed at controlling the secularist establishment which has long dominated Turkey.