Turkey's Constitutional Court has ruled that the rights of two leading journalists detained since November have been violated. They reported on alleged weapons' supplies to Islamists in Syria. 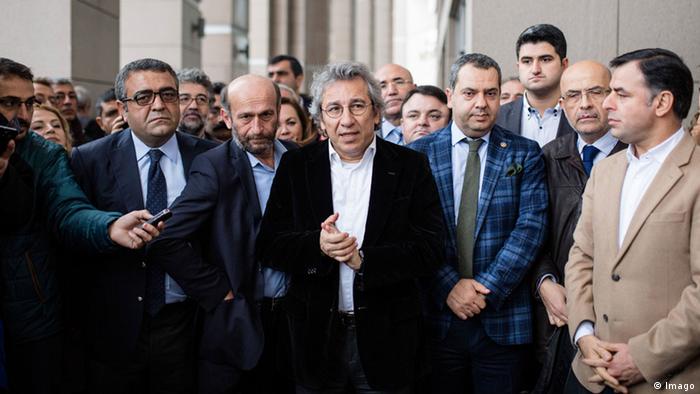 "Cumhuriyet" newspaper's editor-in-chief Can Dundar and Ankara bureau chief Erdem Gul have been in jail awaiting trial since November on charges of revealing state secrets over a report alleging that President Recep Tayyip Erdogan's government tried to ship arms to Islamists in Syria.

The court convened to discuss the journalists' individual petitions and ruled on Thursday in favor of Dundar and Gul, saying that their "rights to personal liberty and security had been violated," according to a statement on the court's website. According to Turkish media reports, the judges voted 12 in favor and three against the ruling. 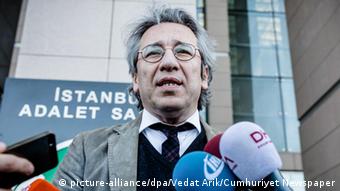 Can Dundar speaking in front of the courthouse in 2015

"Their freedom of expression and freedom of press" were also violated, the court added as it ruled that the dossier would be sent to the lower court for "the removal of violation." This should pave the way for the journalists' release, private NTV television reported.

"The local court must implement the decision of the Constitutional Court and let them go free either within the next few hours or at the latest early tomorrow," "Cumhuriyet" editor Kemal Göktas told the German DPA news agency.

Media reports added that the men's lawyers had already filed the petition for their clients' release at the Istanbul court that ordered their arrest.

The pair was due in court on March 25.

The case revolves around a report published in "Cumhuriyet" last May alleging that Erdogan's government tried to ship arms to Islamists in Syria. The report claimed to show proof that a consignment of weapons seized at the border in January 2014 was bound for Syria.

"Cumhuriyet" published what it said were images of Turkish trucks carrying ammunition to Syrian militants. The paper said the images proved that Turkey was smuggling arms to rebels - a claim the government rejected. 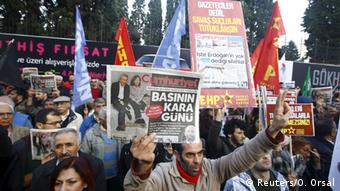 Demonstration for press freedom in November 2015

Dundar and Gul were charged with obtaining and revealing state secrets "for espionage purposes" and seeking to "violently" overthrow the Turkish government as well as aiding an "armed terrorist organization." They were arrested in late November and have been held in the Silivri jail on the outskirts of Istanbul ever since. Turkish prosecutors demanded life terms for the pair, as well as aggravated life sentences, which impose tougher conditions.

The case has sparked controversy both in and outside of Turkey. Erdogan was reported to have personally warned Dundar that he would "pay a price" over the front-page story.

The European Union warned Ankara it needed to show "full respect" for human rights as part of its bid to become a member of the bloc.

US Vice President Joe Biden on an official visit to Istanbul in January met with Dundar's wife and son. He said media were being "intimidated or imprisoned for critical reporting" in Turkey.