Turkey prepares for ground assault on Kurdish rebels in Iraq | Europe | News and current affairs from around the continent | DW | 24.08.2011

Turkey prepares for ground assault on Kurdish rebels in Iraq

Turkish forces have begun massing on the Iraqi border ahead of an expected attack on Kurdish rebels in the neighboring country's mountainous northern region. The attack would follow days of airstrikes on the area. 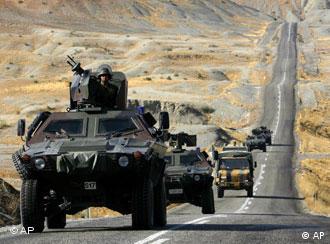 Thousands of Turkish troops have been stationed near the Iraqi border

Recent days have seen an escalation in the conflict between the Turkish state and Kurdish rebel group the PKK, with Turkish forces bombarding rebel positions in neighboring northern Iraq.

The airstrikes, which the government claimed killed some 100 rebels and the PKK said killed only three, followed the killing of nearly 40 Turkish solders by the PKK in recent weeks.

Those PKK attacks were carried out in retribution for earlier special forces operations which reportedly eliminated more than 20 rebels. Stoking Kurdish anger, soldiers were reportedly ordered to leave rebel corpses to decompose, prompting the PKK to vow revenge.

The PKK has been fighting an armed conflict against the Turkish state for greater Kurdish autonomy since 1984.

Turkey's recent military responses to the rebels have strengthened the hand of Prime Minister Recep Tayyip Erdogan as he maintains a tough anti-PKK platform.

Erdogan promised this week that the counter-strikes would continue: "Carrying out operations for the peace of the nation is the most natural right of the government. It is an obligation and we will carry it out whatever it takes," he said.

But pro-Kurdish member of parliament Ertugral Kurkcu said the spiraling violence was of great concern. 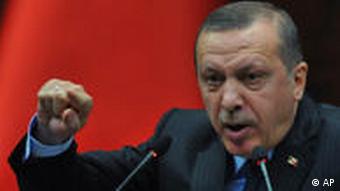 Erdogan has vowed continued strikes against the PKK

"The prime minister has the wrong idea that Kurds [will be put in place by] force. But he is totally wrong," Kurkcu said. "So these incorrect policies are going to be corrected through open struggle."

War on the ground

But the violence was expected to escalate further with an anticipated cross-border operation by the Turkish army into Iraq's northern mountainous regions, where the bulk of the PKK rebels are based. In recent days, over 3,000 Turkish soldiers have been relocated to the border area.

A decision by the army to cancel its Victory Day banquet on August 30, which is usually attended by all senior officers, has been viewed as a sign of the imminence of the operation.

But Brigadier Haldun Solmazturk, a veteran of more than 30 Iraq operations carried out by the Turkish army since the 1990s, says the efficacy of any cross-border attack in solving the wider conflict would be limited.

"The problem is mainly a Turkish problem inside Turkish borders," Solmazturk said. "I mean, the existence of PKK elements in [Iraq's] Kandil Mountains is just a small extension of the major problems inside Turkey. 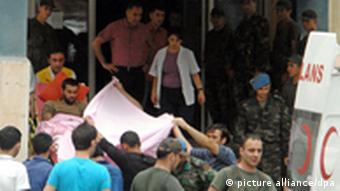 Thousands have perished in the decades-long conflict with the PKK

"So we have to accept that, and we have to avoid giving the Turkish people a false impression that once we cross the border, even way into northern Iraq, and imprison their leaders, that all of sudden the whole problem will evaporate - this is not the case."

Furthermore, any such operation would likely severely damage the close relations that have developed between Ankara and the regional Iraqi Kurdish leadership, which promptly condemned this week's airstrikes over its territory.

In Turkey, meanwhile, there is concern that such an operation could further diminish any hope of a peaceful resolution to the near-30-year conflict.

Turkish warplanes have attacked suspected bases of the Kurdish Workers Party (PKK) in northern Iraq, just hours after a dozen Turkish troops died in a rebel ambush nearby. (18.08.2011)

Turkish Prime Minister Erdogan's party has won parliamentary elections. But results show that his AKP will fall short of the two-thirds majority needed to rewrite the constitution without other parties' cooperation. (13.06.2011)