Relations between Turkey and the European Union are at a "critical point" ahead of a decision on whether to allow the country to begin membership talks, Turkish Justice Minister Cemil Cicek said. 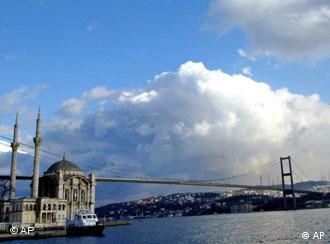 Geographically, Turkey is only a bridge-length away from Europe

"Historically, we have reached a very critical point," Cicek told a conference of Turkish businessmen in Berlin on Thursday.

The Justice Minister said the Dec.17 decision of EU leaders whether to open membership talks with Turkey would reveal "if our relations with the EU are on the right track and if the EU is able to reconcile its own interests with ours."

Germany, which is home to two and a half million Turkish immigrants, has already said Chancellor Gerhard Schröder will vote in favor of beginning accession talks at the EU summit in two months. However, Cicek said he was worried that some Europeans were "astonishingly ignorant" about Turkey, and he feared this lack of knowledge and the misperceptions would sway the decision against the predominantly Muslim nation.

"Among public opinion in Europe, some people believe Turkey should not be admitted, no matter what it does. This is one reason among many others that we are worried," he said while in the German capital to drum up support for Turkey's entry into the European bloc.

Cicek said the Oct. 6 European Commission report that recommended Turkey be allowed to start talks, while expressing certain reservations specifically on labor migration and the prospects of continued progress in legal reforms, would not convince the skeptics.

"The report was like a plate of rice that when you taste it, you find pieces of grit which look like grains of rice," Cicek explained.

German Interior Minister Otto Schily, a member of Schröder's Social Democrats Party, stressed Germany's support for Turkey's bid, but warned that even if it were given the green light, much work still lay ahead.

"Have no illusions, the road ahead is long and strewn with obstacles," Schily said in a speech on Thursday.

DW-WORLD looks at the transformation of Turkey in the last year and the discussion surrounding membership in the European Union.

During a three-day parliamentary group meeting in Istanbul, Europe's Greens have come out in support for Turkey's EU bid and criticized proposed national referendums on its membership. (Oct. 19, 2004)