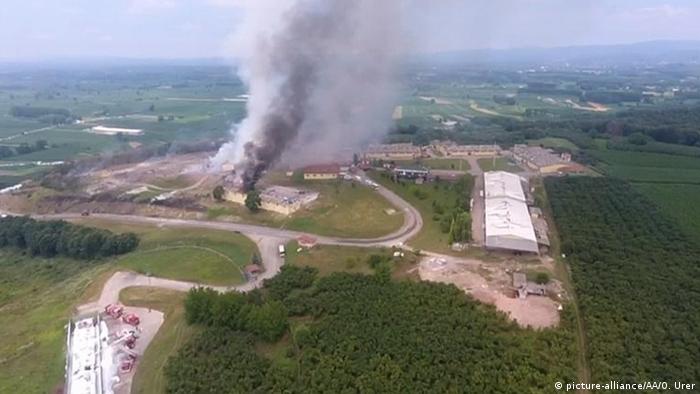 At least four people died and at least 97 people were injured when the largest fireworks factory in Turkey exploded on Friday.

There were up to 186 workers at the factory outside the town of Hendek, Koca said.

Sakarya regional governor Cetin Oktay Kaldirim said the plant had had 110 tons (120 US tons) of explosives in its depots and the explosion could be heard as far as 30 kilometers (18 miles) away.

Of the 97 injured, 16 were released from hospital and one was in a critical condition, he said.

An investigation has been launched to determine the cause of the incident.

Two helicopters and a plane joined firefighters to try and contain the fire, however they were hampered by continuing blasts. About 85 ambulances, two air ambulances and 11 rescue teams were also involved.

Authorities warned local residents to wear masks and stay inside due to toxic smoke. About six hours after the incident, the flames were under control.

Authorities reportedly sealed off roads to the factory after family members rushed to the site in search of loved ones.

HaberTurk reported there had been three separate explosions at the factory in 2009, 2011 and 2014, with the final one killing one person.

Ecuador has banned most fireworks in the archipelago, just days before New Year's celebrations. Conservationists say the explosions cause damage to the islands' wildlife. Germans, too, have been urged to limit fireworks. (29.12.2018)