It has taken two years for the political parties in Tunisia to draft the country's new constitution. The resulting document , however, has been criticized for being inconsistent and contradictory. 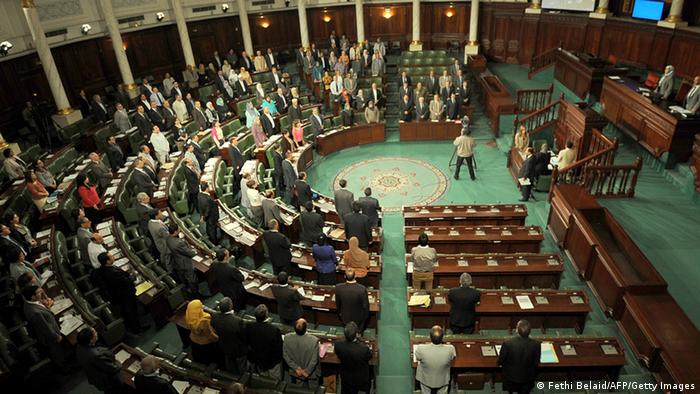 The exhaustion is plain to see on the faces of Tunisian parliamentarians. "It's like giving birth: painful, but in the end everyone is happy when the child arrives," said Mehrezia Laabidi, a member of Tunisia's Islamist political party Ennahda.

As deputy chair of Tunisia's constituent assembly, she headed numerous plenary sessions over a period of several weeks, often having to raise her voice to restore order when the debate became too heated among the approximately 200 members. The National Assembly is due to vote on the proposed constitution on Sunday, January 26, after the original vote, scheduled for Saturday, was postponed.

There is no denying that Tunisia's new constitution has had a very tumultuous birth, marked by bitter debates about religion, women's rights and the independence of the judiciary. But in the end, the conservative and liberal sides have managed to reconcile their differences, partly thanks to the conservative majority giving in on some issues. This consensus, however, has also created contradictions in the text. 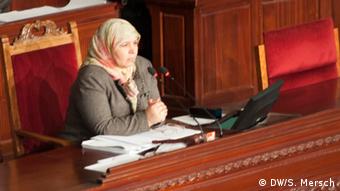 One of the key bones of contention throughout the process was the role of religion in modern Tunisia. While the preamble and Article 1 of the constitution mention Islam without defining its national significance, other passages are more succinct. Article 6, which was initially rejected and then approved following several alterations, guarantees religious freedom but also states that the government protects all that is "holy."

For Amira Yahyaoui, president of Al Bawsala, an NGO devoted to monitoring local politics, this is the perfect example of the constitution's overall contradictory nature. "Religious freedom and the protection of holiness don't go together," she said. Another contradictory point is that the future president has to be Muslim.

"This is a schizophrenic text that includes various statements and opposing statements in order to please everybody," commented constitutional lawyer Salwa Hamrouni, adding that the constitution will present a real challenge to the judges at the future constitutional court.

Apart from the role of religion, Tunisians are anxious to see how the topic of gender equality will be presented in the new constitution. There were fears that that the new constitution would be a setback for Tunisian women, who were granted many rights in 1956, shortly after Tunisia achieved independence from France, including the right to vote and file for divorce. Doubts remain, despite repeated assurances by the Ennahda-led coalition that women's rights would not be diminished.

Articles 20 and 45 of the new constitution can be seen as progressive in this area. They not only grant men and women an equal status but also stipulate that a certain number of seats in city and district governments must be given to women. The adoption of these articles prompted jubilation among many parliamentarians, some of whom broke into a spontaneous rendition of the national anthem.

However, women's rights campaigners fear that other articles in the constitution can be misused for the purpose of limiting the newly won freedoms. For example, they warn that the "holy right to life" can be used to combat abortion. 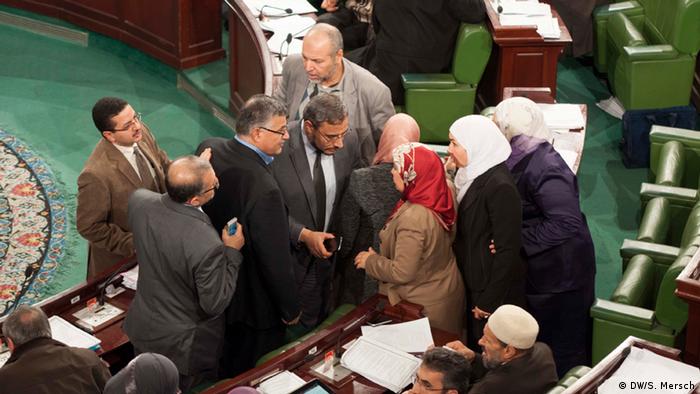 Reservations about the outcome

However, the uprisings that took place in Tunisia three years ago do reverberate in the new constitution. The country's poorer, rural regions are being empowered, and the president's and prime minister's roles are defined in a way that aims to prevent an autocratic takeover of power. Also, a newly formed constitutional court is to monitor the legitimacy of future laws. But, despite these measures, the response to the final draft - which is as polarized as Tunisian society itself - has been lukewarm. Both sides have been forced to make major concessions.

Karima Souid, a member of the left-leaning Al-Massar (Social Democratic Path) party points out that the role of young people who were behind the protests three years ago has been marginalized. "Having to fight for the rights of women and young people in this day and age isn't normal - these rights should be something natural," she commented. "It shows that we don't all pursue the same social model."

Souid hopes that the future parliament will reformulate the relevant regulations. This parliament, just like the next president, is to be elected sometime later this year. A transitional government under the leadership of former industry minister Mehdi Jomaa is due to take over at the start of next week. Prime Minister Ali Larayedh (Ennahda) announced his resignation in early January in order to put an end to the country's escalating political crisis, triggered by the murder of two opposition politicians.

Three years after the overthrow of President Ben Ali, Tunisians are still waiting for their new constitution. There have been quite a few empty promises since 2011, but there is also some progress. (13.01.2014)

Tunisia caught between panic and resignation

Attempted attacks on hotels and assaults on security forces have awakened dark memories in Tunisia. Officials have tried turning a blind eye to the violence but are beginning to recognize the problem. (01.11.2013)