An unusually high number of students and teachers at a school in southwestern Germany have been infected with tuberculosis. Health officials are scouring the school for clues about why the disease spread. 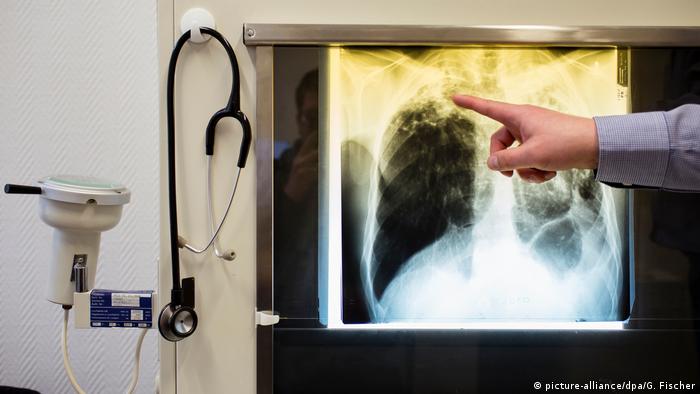 Health officials on Thursday examined a school in the southwestern German town of Bad Schönborn where a tuberculosis outbreak has infected dozens of children and adults.

A total of 109 students, teachers and other school employees have been infected, the district administration of Karlsruhe said.

Four people, including at least two students, have active cases of tuberculosis. That means they are presenting symptoms and could be contagious.

The actively sick students have been removed from the school and are receiving medical treatment, the district administration said.

"We cannot rule out the possibility that there will be new cases of active illness," Ulrich Wagner from the Karlsruhe health department told the Badische Neueste Nachrichten newspaper.

Tuberculosis – on the rise again?

At the beginning of July, two children at two different schools in Bad Schörnborn were found to have active tuberculosis.

Since then, the number of infected people has continued to rise, particularly at the Michael Ende Gemeinschaftsschule, where a student in the eighth grade was initially infected.

Officials said that some 56 students in the eighth grade — 88% of the entire class — are currently infected.

The case is concerning because several children from different grades as well as teachers who would not have been greatly exposed to to the eighth grade students have also tested positive for the infection.

Health officials are now examining the school's classrooms to determine how the bacteria were able to spread to so many people, local public broadcaster SWR reported.

Fears over rise of drug-resistant TB

Local officials emphasized that tuberculosis is a treatable and curable illness, adding that not everyone who is infected with the disease will become sick.

Tuberculosis is caused by bacteria that spread from person to person through tiny droplets released into the air by coughing and sneezing.

When active, tuberculosis most often affects the lungs — resulting in chest pain, fever, weight loss, and coughing that lasts for weeks. Sometimes blood is coughed up.

The World Health Organization (WHO) estimates that around a quarter of the world's population is infected with latent tuberculosis — meaning they are not actively ill and cannot transmit the disease.

The WHO says that those who are infected with tuberculosis bacteria have a 5 to 15% chance of becoming sick.

Scientists from APOPO, an international firm known for using rats to locate landmines is now training the giant pouched rodents to sniff out tuberculosis among inmates in Tanzania and Mozambique. (04.04.2016)