Trial of Costa Concordia captain adjourned due to lawyer strike

The trial of Francesco Schettino, the captain of the shipwrecked Costa Concordia cruise liner, has been adjourned due to a lawyer strike. He faces manslaughter charges for the January 2012 crash that killed 32 people. 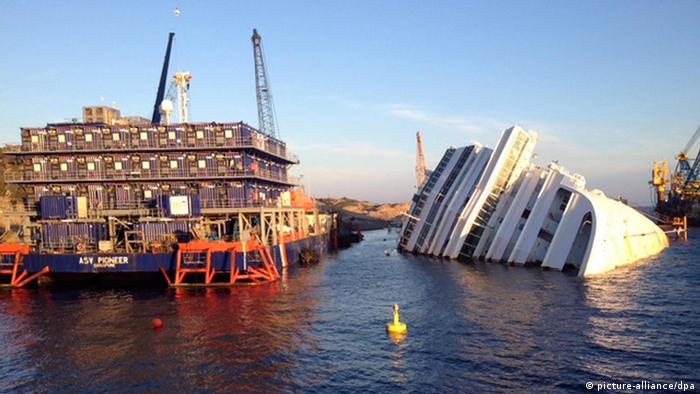 Captain Francesco Schettino appeared in court on Tuesday to face charges of multiple manslaughter, causing environmental damage and abandoning the Costa Concordia cruise liner that crashed of the coast of Italy in January 2012.

However, shortly after the trial began it was adjourned to July 17 due to a national lawyers' strike in Italy.

Schettino's defense team, Domenico and Francesco Pepe, have said they plan to show that "no single person was responsible" for the disaster and that the blame should be more evenly shared with other crew members as well as the ships' parent company, Costa Crociere.

Up to 450 witnesses and 250 plaintiffs may be called to give testimony during the trial. One witness scheduled to take the stand is Italian coast guard official Gregorio De Falco, whose leaked phone call to Schettino on the night of the disaster was widely broadcast in reporting about the event. De Falco ordered the captain to return to the ship to direct the evacuation, but Schettino claimed he had fallen into a lifeboat and was coordinating the rescue from the shore.

If convicted, Schettino could face up to 20 years in prison.

On January 13, 2012 the Costa Concordia crashed into rocks off the tiny Tuscan island of Giglio, with 4,229 passengers and crew from 70 countries on board.

Once the ship capsized, a delayed and panicked night-time evacuation was hampered by the fact that some lifeboats could not be deployed. More than a year after the crash, the ship still lies on its side, partially submerged, off the coast of the island.

Out of the 32 people killed during the crash, two of the bodies were never recovered.

In April, Costa Crociere, a unit of the US-based Carnival Corporation, admitted limited responsibility as the captain's employer and in a controversial decision, an Italian judge ordered to pay a one million euro ($1.3 million) fine to avoid potential criminal charges.

Five other defendants, including four crew members and a Costa manager, successfully sought plea bargains with short prison sentences, which are to be ruled on in a separate hearing on July 20.

Six months after the Costa Concordia cruise ship disaster off the Mediterranean coast of Italy, the shipwreck has become a magnet for tourists. For the salvage operation, however, the visitors are a problem. (13.07.2012)