Transparency International has released its 2013 Corruption Perceptions Index, which sees the usual suspects doing badly. But it also reveals differing approaches to graft in what seem to be similar eurozone nations.

Corruption in Spain on the rise

Transparency International's latest index saw Somalia, North Korea and Afghanistan as the three nations with the world's highest degree of corruption as perceived by analysts and business leaders.

TI's index looked at 177 nations around the globe, once again revealing huge differences in how individual countries tackled large-scale graft at home, if they addressed the issue at all. 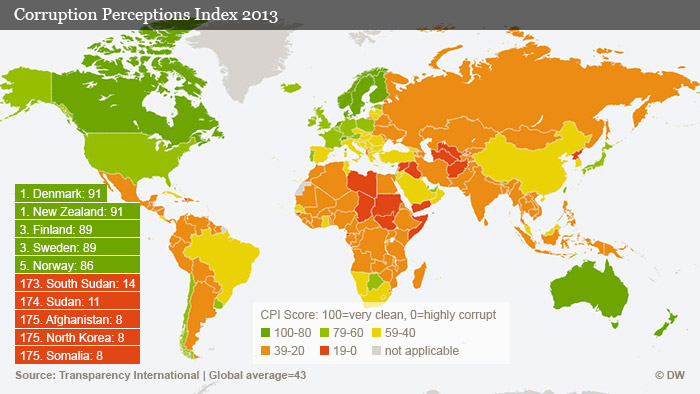 The best performers were once again Denmark and New Zealand, sharing the top spot in the list, followed closely by Finland and Sweden. Germany came in 12th, moving up one notch from where it was a year earlier.

TI took a detailed look at eurozone member Spain which dipped 10 places to 40th position in the rankings. This made it the second-biggest loser, with only war-torn Syria taking a deeper fall.

By contrast, another crisis-hit eurozone nation, Greece, was perceived to have taken significant steps to fight corruption. While being further down the list overall, the nation was able to move up 14 notches to the 80th spot.

"That's one of the most interesting issues for us, the difference between Spain and Greece," TI's Finn Heinrich commented. "You see quite different responses to corruption in the context of economic crisis."

Athens had carried out high-profile anti-graft prosecutions and done a good job in coordinating anti-corruption activities in general. "This is not happening in Spain, quite the opposite," Heinrich added.

Reacting to recent criticism, Ghana’s president John Dramani Mahama has announced anti-corruption measures are to be stepped up. In addition, the president and his ministers will take a 10 percent salary cut. (21.11.2013)