A new report by Greenpeace has found toxic chemicals in a wide range of children's clothing. DW sheds light on what the chemicals are, the risks they present and what can be done about the problem. 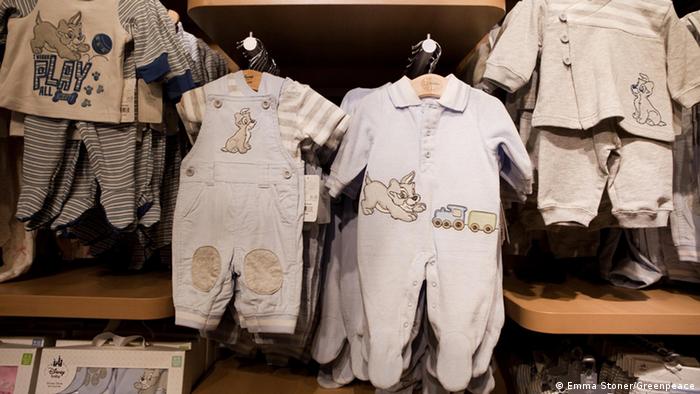 A report released this week by Greenpeace has detected a range of toxic chemicals in children's clothing, made by various manufacturers around the world. The environmental organization found the chemicals in most of the 82 items of children's apparel that it tested, bought in 25 different countries and produced by 12 major brand names, including from high-end retailers.

Manfred Santen, a toxics campaigner for Greenpeace, told DW that "as far as toxicologists know, these concentrations don't present an acute risk for children." The risk mainly occurs when the chemicals are released into the environment, where they can build up in ecosystems and harm wildlife – mainly in the countries where the items are produced, including in China and many South Asian nations.

Santen added that health risks to humans cannot, however, be ruled out. "In that case, the precautionary principle has to be employed," Santen said. The chemicals are used in production of all textiles, including for adults. 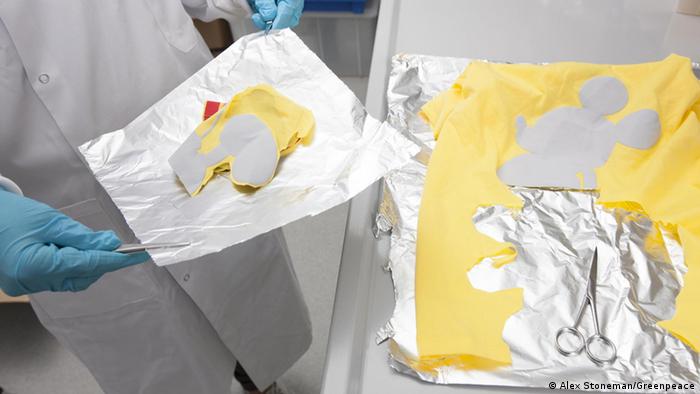 The Greenpeace report tested for five main types of chemicals that are commonly used in textile manufacturing. DW found out what they are, the purpose for which they are used and the potential risks they present.

Phthalates: These are esters of phthalic acid, typically added to plastics to increase flexibility and durability. "We found the highest amounts in plastisol printings," Santan said, which include t-shirts with a large image embossed on the front. Phthalates are known to be endocrine disrupters, Santen said. This means phthalates can disrupt hormone levels in animals, which could disrupt fertility, cause birth defects or even contribute to breast cancer among humans.

Although phthalates biodegrade in the environment, organisms that see prolonged exposure absorb it into their system.

NPEs: Nonylphenol ethoxylates or nonylphenols are used to wash clothing, for example after dying. These can also disrupt hormones – but unlike phthalates, NPEs persist in the environment, and can accumulate in the tissues of a living organism. If discharged into the water, nonylphenol is highly toxic to aquatic creatures.

Santen noted that NPEs are no longer allowed to be discharged in Europe, although it's not yet forbidden in Asia. "But if you put these clothes into the washing machine [any where in Europe], it will be discharged," he pointed out. 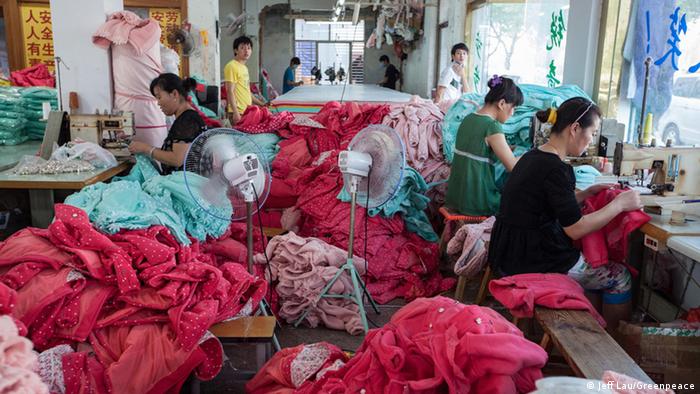 PFCs: Textiles are treated with per- and poly-fluorinated chemicals (or PFCs) to make them water-repellent. PFCs are thus mainly found in outerwear, such as rain jackets and shoes. Surprisingly, the Greenpeace report also found PFCs in Adidas swimwear. "Maybe it makes you faster," Santen said, adding that Adidas could not clarify to Greenpeace how the chemical got into the item.

PFCs are also bioaccumulative and persistent, and have spread around the world. "It's been found in the livers of polar bears and penguins – so it spreads to both the Arctic and the Antarctic," Santen said. Although not all the environmental consequences are known, ionic PFCs like PFOS and PFOA have been linked with cancer and kidney disease.

Organotins: A compound that can include tin, organotin chemicals are used as a biocide largely in cotton clothing. The anti-bacterial and anti-fungal properties prevent textiles from being damaged during the long journey from the countries of production to the countries of sale, and prevent odor if a wearer were to sweat.

Antimony: This element is used as a catalyst in the making of polyester. In higher concentrations, it can act like the poison arsenic. Santen said that although antimony levels were not so high as to be a concern for the child wearing the item, it's still being released into the environment.

The European Union has legal limitations in place for such chemicals in children's toys, but this regulation does not cover children's clothing.

Companies responded to the report by insisting the low levels present in clothing don't pose a health risk, with some adding that they are working to further address the issue. Irish discount clothing company Primark, for example, said that it has a "stringent chemical management policy in place which complies fully with EU legislation," and has "long recognized the importance of continuing to reduce the environmental impact of manufacturing processes." 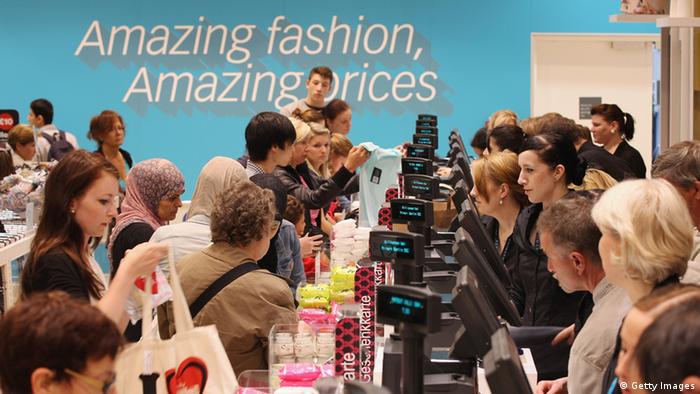 Swedish "fast-fashion" chain H&M is among several of the 18 brands named that have committed to a long-term "zero discharge" goal.

Greenpeace does promote tightening laws against such substances in Europe. Santen said it's also important for countries like China, which is at the center of the textile industry, to better regulate toxic chemicals.

"There is some progress, Chinese politicians are very interested in regulations in Europe and their reach," Santen said. But he added that "if we wait for a law, that will take years and years."

Greenpeace is thus urging consumers to put pressure directly on manufacturers. "Getting the supply chain clean is the fastest way to prevent chemicals from entering the environment," Santen said.

German company Purtex has been working on an eco-friendly alternative chemistry for the textile industry, based on polyurethane. It uses a water-based treatment to repel moisture from textiles, and avoids toxic substances.

"There are no softeners like phthalates, the emulsifiers we use are completely biogradable and free from fluorocarbons like PFOE and PFOA, or metals like antimony," said Birgit Severich, the company's managing director.

Severich told DW that the mother company, Freudenberg, created Purtex in response to demand from consumers seeking safe and healthy textiles. "Our aim was to develop a highly functional green product," she added. 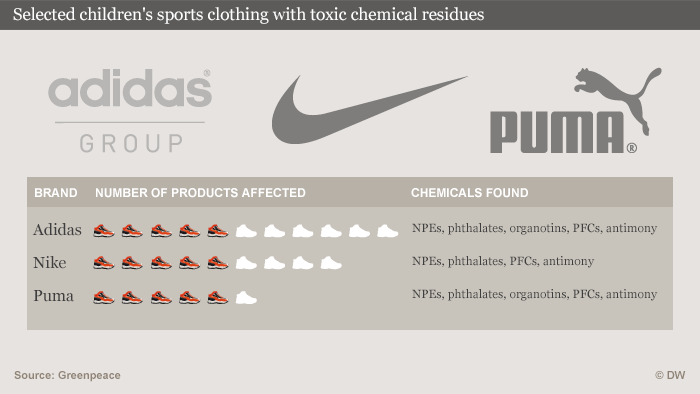 The chemistry has been available since last year, and is getting a lot of interest from textile manufacturers, Severich said. "Most of the well-known brands are in contact with us and evaluating our technology," she said, including Puma, Nike and Adidas.

For people concerned about direct contact with the toxins, Santen advised consumers to wash clothing they've purchased before wearing it. He added that consumers should have the right to know what is in their clothing. To that end, Greenpeace is demanding that the brands disclose discharge data. "It's very important for Chinese people as well," Santen concluded.

Paint and chemical products from plants

Chemist Herman Fischer dreams of paint, plastics and drugs - lots of them, all made from plants and without any crude oil. It's a vision of a new kind of chemical industry. (13.01.2014)

Traces of toxins can be found in garments sold by a variety of international fashion chains. A recent study shows their health effects are worse for those who manufacture the clothing than for their wearers. (25.11.2012)